Bulgaria's Corpbank Head Comes Out as FC Owner Too 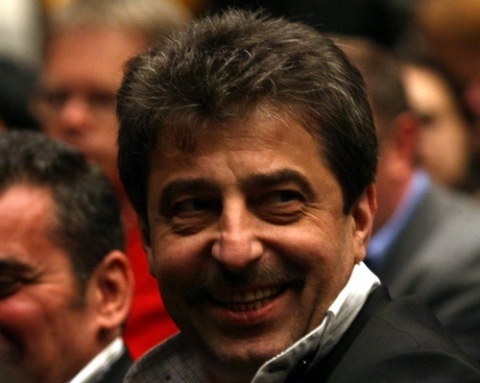 Tsvetan Vassilev made an appearance at the Christmas party of PFC Botev Plovdiv, where he was officially presented as its owner. Photo by BGNES

The head of Bulgaria's Corporate Commercial Bank, who is believed to stand behind the media group of shady mogul Irena Krasteva and a number of key privatization deals, has confirmed speculations that he owns PFC Botev Plovdiv, the oldest in Bulgaria.

Tsvetan Vassilev made an appearance at the Christmas party of the club, where he was officially presented as its owner.

"I decided to invest in PFC Botev because of the great fans, who never stopped supporting the team even during its most difficult years. On the eve of its one hundredth birthday, we all are eager to see the club back into Bulgaria's football ?lite," Vassilev said in a statement, published on the club's site.

Vassilev, who is apparently no longer afraid to show the broad portfolio of his investments, recently triggered a fierce controversy after being surprisingly named the Bulgarian businessman with greatest contribution to the country's economy.

Bulgaria's Corporate Commercial Bank holds nearly half of the money of strategic state-owned companies, it emerged in the middle of last year under pressure from the media.

Vassilev's name was also linked to the privatization of the country's state tobacco giant Bulgartabac Holding.

The head of Corporate Commercial Bank and Irena Krasteva, a media mogul, recently also turned out to be the secret players behind the foreign investors Towercom and Hannu Pro, which won Bulgaria's shady DTT deals.

Austria's ORS also participated in the contests, but was forced to drop out because it is a major shareholder in the Austrian national television ORF.

At the end of August this year a 50% stake in Bulgaria's radio and television broadcasting unit NURTS was sold to Cyprus-based international financial investor Mancelord Limited. The deal price was a whopping EUR 57 M.