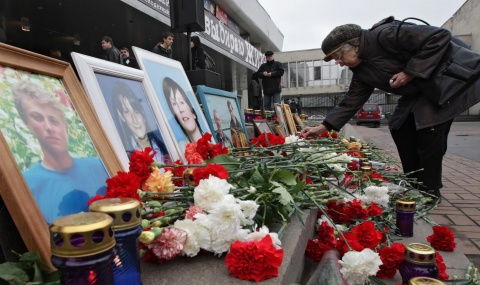 A woman puts flowers in front of the building of the Dubrovka theatre centre during a commemoration ceremony in Moscow, Russia, 26 October 2009. EPA/BGNES

The European Court of Human Rights has mandated that Russia must pay some EUR 1.25 M to hostages in the October 2002 Moscow Dubrovka Theater crisis.

October 23, 2002, some 40-50 Chechen fighters took the entire audience and performers of the crowded Dubrovka Theater (some 900 people) as hostages in mid-performance.

In the unraveling of a hostage crisis that lasted for days, Russian Spetsnaz decided to spray an undisclosed gas into the building, incapacitating the attackers and many of the hostages.

The special forces then stormed the building, easily eliminating the Chechen militants.

However, as many as 129 hostages also perished, all but one of them from the effects of the gas, according to medical sources.

This has led to a heightened controversy around the level of justification for the operation.

64 of the hostages, some of them having their health affected by the unknown gas, have filed claims against the Russian government at the Strasbourg Human Rights Court.

Tuesday, the Court announced that Russia has used excessive force in handling the crisis, without taking due account of risks to the hostages, which has lead to their physical and emotional suffering.