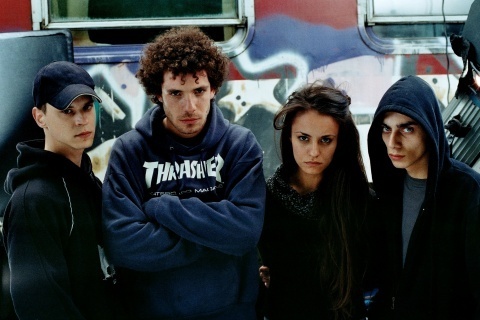 Two years ago Bulgaria made its first foray into the Oscar race when The World Is Big and Salvation Lurks Around the Corner was named to the shortlist of nine semi-finalists for best foreign language film.  Although the film ultimately failed to win a nomination or secure an American release, it awakened audiences to a new vitality in Bulgarian cinema.  This year's Bulgarian entry, Tilt, may be an even stronger film, though it's probably too downbeat to make much headway in the marketplace.

The film is set during the period in the late 1980s and early 1990s, when Communism was collapsing all over eastern Europe.  The early scenes find a bunch of disaffected young men chafing under the restrictions of the Communist regime, hanging out in underground clubs and selling porno videos on the black market.   Stash (engaging newcomer Yavor Baharoff) may be the most adventurous of the pack.  Racing a bus on his skateboard, he breaks a leg, but the injury puts him in touch with Becky (Radina Kardjilova), the daughter of a Communist colonel (veteran actor Georgi Staykov).  The two fall in love, to the dismay of her father.  When Stash and two buddies decide to leave Bulgaria for Germany after the fall of the Berlin Wall, Becky's father prevents her from joining them.  Stash continues to pine for her while working menial jobs in West Germany.  When he finally returns to Bulgaria, he finds Becky involved with a former gang rival.  While the country is now an ostensible democracy, conditions have not really improved.  Becky's father has become a Mafia overlord in the newly liberated Bulgaria.

Director Viktor Chouchkov Jr. efficiently conveys the dramatic changes in the country over a two-year period.  A scene in which the young men say their farewell to Sofia right under the shadow of a huge Soviet-installed military statue is juxtaposed with a later scene in which the statue has been defaced with graffiti.  Aided by cinematographer Rali Ralitchev, Chouchkov demonstrates a fine eye for the disruptions of a country in transition.

The picture is something of a family affair. Chouchkov's brother was co-writer and producer, and their father composed the haunting music.  The director honors the spirit of youthful rebellion while also recognizing its costs.  Scenes in Germany, where the three exiles are crammed into a dilapidated rooming house with other Bulgarian refugees, suggest that freedom can be illusory.  Ovanes Torosyan and Ivaylo Dragiev as Stash's two cronies and Alexander Sano as his dangerous rival all seethe with energy.

The two leads carry the movie.  Baharoff convinces us of Stash's anger and reckless energy, as well as his fundamental decency.  Kardjilova captures Becky's intensity as well as her instability, and there is unmistakable chemistry between the two stars.  Tender scenes between Stash and his mother help to deepen his character, though one wishes more time had been devoted to the family relationships.  The sharp editing helps to keep the movie hurtling forward.  Although some of the grungy settings and sudden explosions of violence may alienate the older audiences who generally support foreign films, the film's humanity is confirmed by the poignant conclusion.  With his options running out, Stash makes a crucial choice that demonstrates his moral awakening as well as his unselfish love for Becky. This potent film lingers in the memory.