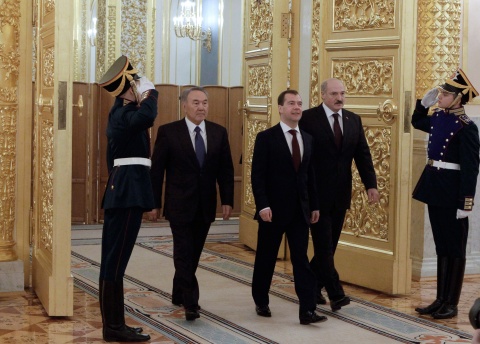 The state leaders of Russia, Belarus and Kazakhstan have approved the appointment of the "Eurasian Economic Commission", a new supranational body to integrate the three former Soviet republics within a common economic space, the so called Eurasian Union, as of January 1, 2012.

"I want to congratulate Khristenko as chairman of the Eurasian Economic Commission," Russian President Dmitry Medvedev said at the commission's session. Khristenko will leave his current office after the appointment.

In November, the Russian, Belarusian and Kazakh presidents signed a declaration on Eurasian economic integration, a roadmap of integration processes aimed at creating the Eurasian Economic Union, which will be based on the Customs Union and common economic space among the three countries.

Medvedev and his Belarusian and Kazakh counterparts Alexander Lukashenko and Nursultan Nazarbayev also approved at their summit on Monday decisions on enforcing agreements from next year on the free movement of goods, capital and workforce within the common economic space between the three former Soviet republics and regulating the work of the Eurasian Economic Commission.

Russian President Dmitry Medvedev said that the summit was intended to adopt "a package of important decisions on the launch of a new supranational body, the Eurasian Economic Commission, already this year, and the launch of the Common Economic Space as a whole."

Putin is the architect of the so called Eurasian Union, a new entity supposedly meant to promote cooperation both with Europe and the Asia-Pacific region, as of 2012.