Arch-Rival Klaus: Havel and I Had Fruitful Disputes 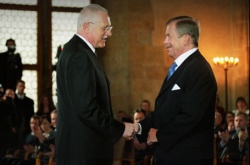 Czech President Vaclav Klaus has expressed his grief on the passing away of his predecessor, great Eastern European dissident Vaclav Havel.

Havel passed away on Sunday after a protracted respiratory disease, just after turning 75 October 5.

"It was Havel who invited me to the emerging Civic Forum," said Klaus in an official address Sunday, referring to the platform that led then-Czechoslovakia to democratization away from the communist regime.

The two Vaclavs went on to become arch-rivals in their visions for the development of the Czech Republic.

"The disputes between us were fruitful, even if sometimes controversial," acknowledged Klaus Sunday.

"I have expressed my personal condolences to Havel's wife Dagmar and I will continue to be in touch with her," said the Czech President.

He said that a condolence book for Vaclav Havel will be placed in Prague Castle Monday.