Who Is Who: Czech Playwright, Dissident, President Vaclav Havel 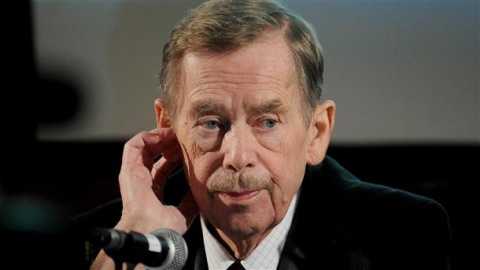 Vaclav Havel has passed away at 75. Photo by EPA/BGNES

The former President of Czechoslovakia and the Czech Republic, and one of the most well known dissidents in Eastern Europe Vaclav Havel passed away on Sunday, December 18, at the age of 75.

V?clav Havel was born in Prague, on 5 October 1936. He grew up in a well-known and wealthy entrepreneurial and intellectual family, which was closely linked to the cultural and political events in Czechoslovakia from the 1920s to the 1940s.

His father was the owner of the suburb Barrandov which was located on the highest point of Prague and of Barrandov film studios.

Because of Havel's bourgeois history, the Communist regime did not allow Havel to study formally after he had completed his required schooling in 1951.

In the first part of the 1950s, the young Havel entered into a four-year apprenticeship as a chemical laboratory assistant and simultaneously took evening classes; he completed his secondary education in 1954. For political reasons, he was not accepted into any post-secondary school with a humanities program; therefore, he opted to study at the Faculty of Economics of Czech Technical University in Prague but dropped out after two years. In 1964, Havel married proletarian Olga ?pl?chalov?.

After military service (1957–59), he worked as a stagehand in Prague and studied drama by correspondence at the Theater Faculty of the Academy of Performing Arts in Prague (DAMU).

It was soon followed by The Memorandum, one of his best known plays, and the The Increased Difficulty of Concentration, all at the Balustrade. In 1968, The Memorandum was also brought to The Public Theater in New York, which helped establish his reputation in the United States.

During the first week of the Warsaw Pact invasion of Czechoslovakia, Havel provided a commentary on the events on Radio Free Czechoslovakia in Liberec.

Following the suppression of the Prague Spring in 1968 he was banned from the theater and became more politically active. He was forced to take a job in a brewery, an experience he wrote about in his play Audience. This play, along with two other "Van?k" plays (so-called because of the recurring character Ferdinand Van?k, a stand in for Havel), became distributed in samizdat form across Czechoslovakia, and greatly added to Havel's reputation of being a leading revolutionary.

This reputation was cemented with the publication of the Charter 77 manifesto, written partially in response to the imprisonment of members of the Czech psychedelic band The Plastic People of the Universe.He also co-founded the Committee for the Defense of the Unjustly Persecuted in 1979. His political activities resulted in multiple stays in prison, the longest being four years, and also subjected him to constant government surveillance and questioning. His longest stay in prison, from June 1979 to January 1984, is documented in Letters to Olga, his late wife.

He was also famous for his essays, most particularly for his articulation of "Post-Totalitarianism" (Power of the Powerless), a term used to describe the modern social and political order that enabled people to "live within a lie."

Havel was a supporter of non-violent resistance, a role in which he has been compared, by former US President Bill Clinton, to Mohandas Karamchand Gandhi and Martin Luther King Jr., he became a leading figure in the Velvet Revolution of 1989, the bloodless end to communism in Czechoslovakia.

On 29 December 1989, while leader of the Civic Forum, he became President of Czechoslovakia by a unanimous vote of the Federal Assembly. After the free elections of 1990 he retained the presidency.

Havel supported the retention of the federation of the Czechs and the Slovaks during the breakup of Czechoslovakia. On 3 July 1992 the federal parliament did not elect Havel – the only candidate – due to a lack of support from Slovak MPs. The largest party, the Civic Democratic Party, let it be known it would not support any other candidate. After the Slovaks issued their Declaration of Independence, he resigned as president on 20 July, saying he would not preside over the country's breakup.

However, when the Czech Republic was created, he stood for election as president on 26 January 1993, and won. Unlike in Czechoslovakia, he was not the Czech Republic's chief executive. However, owing to his prestige, he still commanded a good deal of moral authority.

In December 1996 the chain smoking Havel was diagnosed as having lung cancer.[13] The disease reappeared two years later. He later quit smoking. In 1996, Olga, beloved by the Czech people and his wife of 32 years died of cancer. Less than a year later Havel remarried, to actress Dagmar Ve?krnov?.[14]

The former political prisoner was instrumental in enabling the transition of NATO from being an anti-Warsaw Pact alliance to its present inclusion of former-Warsaw Pact members, like the Czech Republic. Havel advocated vigorously for the expansion of the military alliance into Eastern Europe, including the Czech Republic.[15][16]

Havel was re-elected president in 1998. Havel left office after his second term as Czech president ended on 2 February 2003; V?clav Klaus, one of his greatest political opponents, was elected his successor on 28 February 2003. Margaret Thatcher writes of the two men in her foreign policy treatise, Statecraft, reserving greater respect for Havel, whose dedication to democracy and defying the Communists earned her admiration

Havel has received the US Presidential Medal of Freedom, the Philadelphia Liberty Medal, the Order of Canada, the freedom medal of the Four Freedoms Award, and the Ambassador of Conscience Award and several other distinctions.

He was also voted 4th in Prospect magazine's 2005 global poll of the world's top 100 intellectuals. He is a founding signatory of the Prague Declaration on European Conscience and Communism.

Havel is known as one of the most famous dissidents in the communist countries in Eastern Europe since before the suppression of the Prague Spring in 1968 by the Warsaw Pact invasion of Czechoslovakia.

*Compiled from Wikipedia and international media