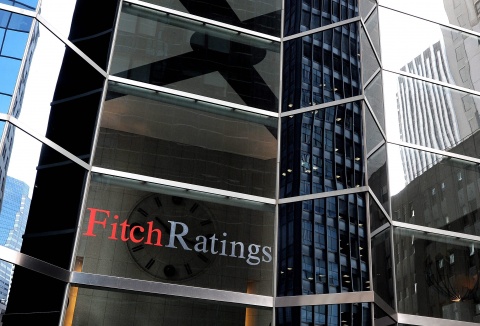 A view of the offices of Fitch Ratings in New York, New York, USA, 08 December 2011. EPA/BGNES

“Fitch Ratings has today affirmed France's Long-term foreign and local currency Issuer Default Ratings (IDRs) as well as its senior debt at 'AAA'. Fitch has also simultaneously affirmed France's Country Ceiling at 'AAA' and the Short-term foreign currency rating at 'F1+'. The rating Outlook on the Long-term rating is revised to Negative from Stable,“ Fitch said in a statement.

It pointed out that the affirmation of France's 'AAA' status is underpinned by its “wealthy and diversified economy, effective political, civil and social institutions and its financing flexibility reflecting its status as a large benchmark euro area sovereign issuer.“

“In addition, the French government has adopted several measures to strengthen the creditability of its fiscal consolidation effort. Nonetheless, government debt to GDP is currently projected by Fitch under its baseline scenario to peak in 2014 at around 92%, higher than any other 'AAA'-rated sovereign with the exception of the UK and US and significantly higher than other 'AAA'-rated Euro Area peers,“ the agency said.

According to Fitch, France's sovereign credit profile benefits from a broad and stable tax base - the volatility of the revenue to GDP ratio is half the 'AAA' median - and the interest service burden is moderate and broadly comparable with other 'AAA's.

Under Fitch's baseline scenario that does not incorporate the realisation of substantial fiscal liabilities arising from the Eurozone crisis or other adverse shocks, even such an elevated level of government indebtedness is consistent with France retaining its 'AAA' status assuming that government debt is firmly placed on a downward path from 2013-14.

The Negative Outlook on the French rating reflects Fitch's view that the likelihood of the realization of contingent liabilities, although still not our base-case assumption, has materially increased, as has the risk of a much worse than expected economic and consequently fiscal outturn.

“Similar to other highly rated peers, France faces medium and long-term challenges to improve the functioning of the labour market and enhance international competitiveness. Fitch recognizes that the authorities have adopted measures to address these weaknesses, though a more radical structural reform agenda would underpin greater confidence in the underlying potential growth rate of the French economy. However, corporate and especially household indebtedness is moderate compared to some 'AAA' peers, notably the UK and US, while foreign indebtedness remains modest, albeit rising.

“The Negative Outlook is prompted by the heightened risk of contingent liabilities to the French state arising from the worsening economic and financial situation across the Eurozone, as reflected in the Rating Watch Negative placed on the sovereign ratings of several Euro Area Member States (EAMS) on 16 December 2011. As Fitch commented in its report on 23 November, 'French Public Finances', the fiscal space to absorb further adverse shocks without undermining its 'AAA' status has largely been exhausted.

“The intensification of the Eurozone crisis since July constitutes a significant negative shock to the region and to France's economy and the stability of its financial sector. Since May, when Fitch last affirmed France's 'AAA' status, its forecast for economic growth in 2012 has been cut from 2.1% to 0.7% with around one-in-four chance of outright contraction. Despite the additional fiscal measures announced in August and November equivalent to around 1% of GDP, further measures are likely to be required in order to cut the deficit to 3% of GDP by 2013 and stabilize government debt below 90% of GDP in light of the worsening economic and financial outlook,“ state's the global credit rating agency.

In Fitch's opinion, the commitments made by leaders at the EU Summit on 9-10 December and by the ECB were not sufficient to put in place a fully credible financial firewall to prevent a self-fulfilling liquidity and even solvency crisis for some non-AAA euro area sovereigns. “In the absence of a 'comprehensive solution', the Eurozone crisis will persist and likely be punctuated by episodes of severe financial market volatility,“ it said.

Relative to other 'AAA' Euro Area Member States, France is in Fitch's judgement the most exposed to a further intensification of the crisis.

“It has a larger structural budget deficit and higher government debt burden relative to Euro Area 'AAA' peers. Moreover, relative to non-Euro Area 'AAA' peers, notably the US ('AAA'/Negative Outlook) and the UK ('AAA'/Stable Outlook), the risk from contingent liabilities from an intensification of the Eurozone crisis is greater in light of its commitments to the European Financial Stability Facility (EFSF) and the European Stability Mechanism (ESM), as well as indirectly from French banks that are less strong than previously assessed as reflected in recent negative rating actions by Fitch,“ the agency explained.

The Negative Outlook indicates a slightly greater than 50% chance of a downgrade over a two-year horizon.

“In the absence of a material adverse shock, most likely associated with dramatic worsening of the Eurozone crisis, Fitch would not expect to resolve the Negative Outlook until 2013,“ it pointed out.