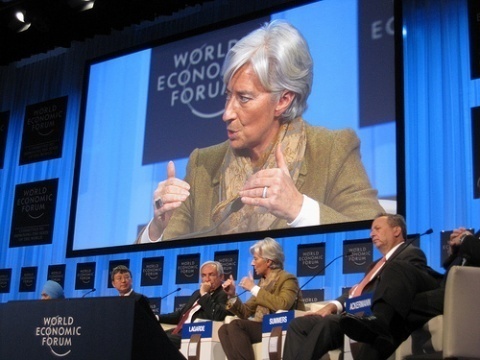 Christine Lagarde is pictured here at the World Economic Forum in Davos this year. Photo by EPA/BGNES

The global economic outlook is gloomy and no country is immune from the escalating risks, the head of the International Monetary Fund has warned.

"There is no economy in the world immune from the crisis that we not only see unfolding but escalating," Christine Lagarde said, speaking at the US State Department in Washington.

The IMF head said global economic leaders now needed to take a rounded approach towards addressing monetary weaknesses, such as those underscored by the current eurozone debt crisis.

Lagarde mentioned economic bright spots in Asia and Latin America, which she said had taken, with IMF help, steps during crises in the 1980s and 1990s to address weaknesses in their banking systems and their financial frameworks.

"All those challenges that they faced in the days of the Asian crisis, of the Latin American crisis, have now served them well," Lagarde said.

The International Monetary Fund cut earlier this month Bulgaria's growth forecasts for this and next year, saying the crisis in Europe has weakened its economic recovery.

"In spite of good policies, the recovery in Bulgaria has been hurt by the economic slowdown and ongoing uncertainty in Europe," the fund said in a statement after the end of its regular visit to Sofia. "The way forward is to maintain prudent fiscal policies, enhance fiscal buffers to help weather any deterioration in conditions."

The IMF now projects real GDP growth at 1.9% in 2011 after setting it at 2.5% in September. For next year the lender expects Bulgaria's economy to expand by a mere 1.3% - down from a 3% estimate in September - despite increased absorption of EU funds that is helping cushion the external headwinds.

Inflation is expected to fall below 3% in 2012, the fund said. It projects a small current account surplus for 2011, which will move to balance in 2012.

"In 2011, the budget is likely to meet the 2.5% of GDP fiscal deficit target, reflecting tight control over expenditures as well as some gains from improved revenue collection. This and the low public debt burden have helped insulate Bulgaria from the escalating euro area turbulence."

The fund has welcomed the proposals to move more quickly with pension reforms.

"The gradual increase in the retirement age starting from January 2012 and the extended service requirements will help fund an increase in the minimum pension," it said.

According to the Washington-based lender the Bulgarian banking system is well-supervised and is well placed to weather the headwinds.

Bulgaria's economic recovery has slowed to 1.6% in the third quarter on an annual basis, the weakest over the last five quarters. The forecast is gloomy as the euro crisis dents demand for Bulgarian exports and consumer spending shrinks too.

Savings are the only thing on the rise, but the joy those figures bring is undermined by the fact that the lion's share of the stashed money is in the hands of a meager 5% of the population.