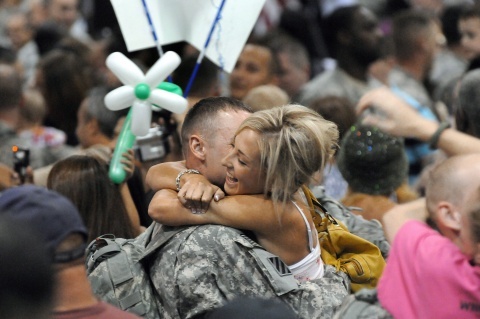 As nearly nine years of US military operations in Iraq came to a formal end on Thursday, President Barack Obama said the troops left behind a "sovereign, stable and self-reliant Iraq".

"Everything that American troops have done in Iraq, all the fighting and dying, bleeding and building, training and partnering, has led us to this moment of success," he said in a speech in North Carolina to troops who have just returned.

"Everything that American troops have done in Iraq, all the fighting and dying, bleeding and building, training and partnering, has led us to this moment of success," he said.

"The war in Iraq will soon belong to history, and your service belongs to the ages."

He said the war had been "a source of great controversy" but that they had helped to build "a sovereign, stable and self-reliant Iraq, with a representative government that was elected by its people".

US troops lowered the flag of command that flew over the Iraqi capital, carefully rolled it and cased it in camouflage in accordance with Army tradition at a toned down and quiet ceremony in Baghdad.

The quiet ceremony, under a bright Iraqi winter sun, was the opposite of the nighttime "shock and awe" bombardment of Baghdad that launched the war against Saddam Hussein in March 2003.

Justified by President George Bush on the grounds that Hussein was seeking weapons of mass destruction that he could share with terrorists such as al Qaeda, the invasion was deeply divisive in America and around the world.

Some 1.5 million Americans have served in Iraq since the US invasion in 2003. In addition to those who died, nearly 30,000 have been wounded.

Troop numbers peaked during the height of the so-called surge strategy in 2007, but the last combat troops left Iraq in August last year.

A small contingent of some 200 soldiers will remain in Iraq as advisers, while some 15,000 US personnel are now based at the US embassy in Baghdad.