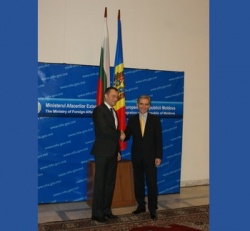 Bulgaria's Foreign Minister Nikolay Mladenov has joined forces with his counterparts from Poland, Romania, Hungary, Slovakia, Latvia, Lithuania, and Estonia on backing the EU integration of the Republic of Moldova.

The foreign ministers of the seven Eastern EU member-states, Bulgaria included, have signed a letter to the EU institutions in support of Moldova's bid to join the EU. Should that happen in the future, Moldova might become the fourth former Soviet Union republic to do so, after the three Baltic states.

They believe that the EU should start talks with Moldova for a Deep and Comprehensive Free Trade Area (DCFTA), and to go into the second phase of EU visa liberalization process from there.

"Moldova's government is carrying out difficult reforms on its EU integration, which is why it needs our full support," Bulgaria's top diplomat Nikolay Mladenov declared during his visit in Moldova's capital Kishinev Thursday.

Mladenov met with Moldova's Prime Minister Vladimir Filat and Moldavian Foreign Minister Iurie Leanca. He praised the government in Kishinev for accounting for the fact that "Moldova has no alternative but Europe", and offered Bulgaria's expertise on the former Soviet republic's talks with the EU in various fields.

This is the second visit of the Bulgarian Foreign Minister in Moldova in less than two months; back in November, Mladenov declared in Kishinev Bulgaria's support for Moldova's territorial integrity and for the official resumption of the talks on the status of the so called Transnistria, a breakaway Moldavian province without international recognition.

Mladenov's visit in Moldova is to continue with meetings at the Bulgarian Lyceum "Vasil Levski" and with the Bulgarian communities in Kishinev and Tarakliya.

The former Soviet republic is the home to one of Bulgaria's largest "historic" minorities abroad, estimated at some 100 000-200 000 people.

The Bulgarian minorities in the region of Bessarabia formed in the 16th-19th century when people from Bulgaria proper fled atrocities in the Ottoman Turkish Empire to the safety of the region which was back then part of the Russian Empire.