US Marks End of Iraq War with Toned Down Ceremony 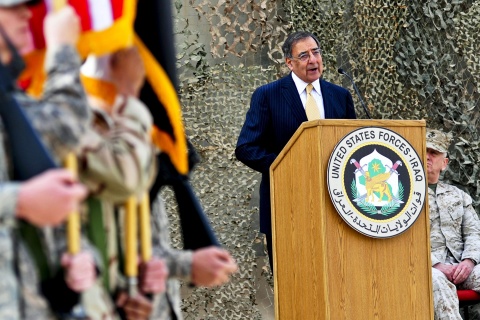 Handout provided by the US Department of Defense shows US Secretary of Defense, Leon Panetta, addressing U.S. service members during a flag casing ceremony that marked the end of Operation New Dawn, at the former Sather Air Base, in Baghdad, Iraq, 15 Dece

The United States of America officially put an end on Thursday to its controversial and expensive war in Iraq with a humble ceremony in Baghdad, CNN reported.

US troops lowered the flag of command that flew over the Iraqi capital, carefully rolled it and cased it in camouflage in accordance with Army tradition.

The quiet ceremony, under a bright Iraqi winter sun, was the opposite of the nighttime "shock and awe" bombardment of Baghdad that launched the war against Saddam Hussein in March 2003.

Justified by President George W. Bush on the grounds that Hussein was seeking weapons of mass destruction that he could share with terrorists such as al Qaeda, the invasion was deeply divisive in America and around the world.

Defense Secretary Leon Panetta, who flew into Baghdad for Thursday's flag-lowering ceremony, recalled that when he visited in 2006 as a member of Bush's Iraq Study Group, "sectarian violence was skyrocketing and it seemed as if nothing was working."

"After a lot of blood spilled by Iraqis and Americans, the mission of an Iraq that could govern and secure itself has become real," he said.

He said the United States was "deeply indebted" to all Americans in uniform. Nearly 4,500 of them were killed in this war. More than 30,000, wounded.

And he hailed the advances made in Iraq since Hussein was ousted.

"This is a time for Iraq to look forward," he said. "This is an opportunity for Iraq to forge ahead on a path to security and prosperity. We owe it to all of the lives that were sacrificed in this war not to fail."

In all, the United States spent more than USD 800 B in Iraq.