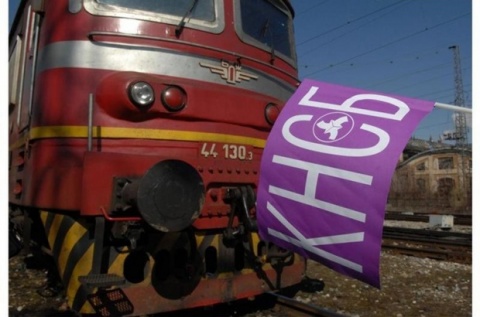 The strike at the Bulgarian BDZ Freight Services ended on its 21st day with the signing of a collective bargaining agreement between the management and the syndicates. Photo by bGNES

The collective bargaining agreement between the management of Freight Services at the troubled State-owned Railways BDZ Holding and the syndicate has been finally sealed.

The news was announced Wednesday by the Freight Services manager, Plamen Dzhurov, who said the agreement was signed for two years – 2011 – 2013.

"We reached agreement with our colleagues from the labor unions. The class labor contract regulates the rights and the duties of both sides. I believe it protects both interests of the company and its management, and workers," said Dzhurov.

He explained the parameters of the 2009 contract were maintained, except the introduction of a new bonus system, based on job performance. The new collective contract will become effective in 6 months and brings the strike at Freight Services to an end.

The syndicates declared satisfaction with the agreement, The Chair of the railways branch of the Confederation of Independent Syndicates in Bulgaria, KNSB, Petar Bunev, informed the paid leave has been scaled down to 20 days, from the previous 22.

"Things are moving along very well with Freight Services; contracts are being signed," Bunev said, stressing the issue of revoking union privileges had not been a problem for them, despite the fact that Dzhurov told the media the management will continue aligning with unions the planned layoffs.

The union leader explained that talks with Passenger Services, which came to a deadlock Tuesday, had not been resumed. When asked how the strike would continue, he replied: "How should we proceed when trains were stopped?"

Earlier during the day, it was reported that the situation with the general strike at BDZ, which has been going on for 21 days, has descended into a messy state.

In a statement Wednesday, the BDZ management claimed the strike had collapsed, with only 17 workers striking in the entire country, after earlier this week it decided to terminate the operation of 166 trains scheduled to run daily between 8 am and 4 pm – the daily period of the strike – as of Wednesday, December 14, 2011, until January 5, 2012.

BDZ keeps claiming that the strike is illegal because of the new train schedule that entered into force as of December 11, 2011.

The BDZ management says the arbitrary decisions of the strike committees and striking workers, deemed by the latter agreements for transport services of the population in times of strike, are made and issued on the base of the old schedule.

The labor unions staged an effective, mass, termless strike after the early November notice of the management of the heavily indebted state-owned railway company BDZ Holding that it intended to lay off 2 000 workers, and reduce the number of trains in operation by 150 (later scaled down to 138) by January 2012.

Meanwhile, nearly 1 000 workers have agreed to leave on their own in exchange of 6 monthly salaries.