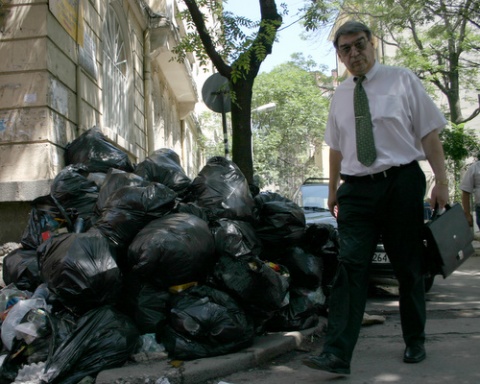 Finding a solution to Sofia ongoing waste problems has been a long-standing and politically sensitive issue. File photo

Bulgaria's second largest city of Plovdiv is going to receive by the end of the year BGN 8 M in compensation for taking Sofia's waste.

The decision was made by the cabinet, during its regular Wednesday meeting, which was held in Plovdiv.

The funds will be transferred to the Plovdiv City Hall bank accounts by December 31, 2011, and the total amount received by the municipality will reach BGN 10 M.

The newly elected Plovdiv Mayor, Ivan Totev, former Regional Governor, who ran on the ballot of the ruling Citizens for European Development of Bulgaria party, GERB, in a tight race against incumbent nationalist, Slavcho Atanasov, assured that the entire amount owed by the State for the capital's garbage will be paid by the end of 2012.

According to Totev, the City Hall had already made a decision on how to spend the money.

While the municipality and the government are currently struggling to build a waste recycling plant with EU funding, which is supposed to relieve the situation with Sofia's waste, in 2009 the cabinet decided to transport waste from Sofia to four municipalities around the country, including Plovdiv, in exchange for additional subsidies for the local budget.

In September 2010, the Plovdiv Municipality, under Atanasov, started a legal procedure against the central government over the controversial measure to deposit household waste from the capital Sofia on its territory.

Local municipalities would not receive State budget compensations for accepting the waste and they are banned from charging higher fees than the local ones.

Finding a solution to Sofia ongoing waste problems has been a long-standing and politically sensitive issue.

Just days ago, it was announced that the Sofia City Hall is negotiating with other municipalities to find a place for the last 90 000 tons of garbage bales dumped and rotting near the capital.

According to representatives of the City Hall, the solution will be found by the end of the year.

This is the last garbage remaining from the staggering 600 000 tons, embedded in the memory of Sofia's residents. The City Hall currently pays BGN 20 for the deposit of one bale, which is a lucrative amount for smaller municipalities.