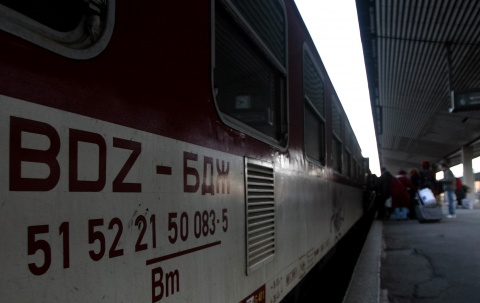 Bulgarian railway workers literally have no way of striking because the BDZ management terminated the respective trains in a preemptive move. Photo by BGNES

The situation with the general strike at the Bulgarian State Railways BDZ, which has been going on for 21 days, has descended into a messy state.

In a statement Wednesday, the BDZ management claimed the strike had collapsed, with only 17 workers striking in the entire country, after earlier this week it decided to terminate the operation of 166 trains scheduled to run daily between 8 am and 4 pm – the daily period of the strike – as of Wednesday, December 14, 2011, until January 5, 2012.

The syndicates have been quick to blame the management of a strike "lockout", with union leader Petar Bunev saying that the striking committees across the country are still discussing how to react, and whether they would resume their strike once the BDZ management starts running the respective trains again.

"Where can we strike right now – they have terminated the operation of the trains," Bunev asked, cited by BGNES.

BDZ keeps claiming that the strike is illegal because of the new train schedule that entered into force as of December 11,

The BDZ management says the arbitrary decisions of the strike committees and striking workers, deemed by the latter agreements for transport services of the population in times of strike, are made and issued on the base of the old schedule.

The labor unions are adamant the strike will continue until an agreement is reached with the BDZ management. They demand the signing of a class labor contract under the same parameters as before the announced start of the reform.

The syndicates and the striking workers also demand the resignations of BDZ CEO Yordan Nedev and Vladimir Vladimirov, Chair of the Board of Directors of BDZ Holding.

The BDZ Freight Transport and BDZ Passenger Transport have filed a Court claim to declare the strike illegal. Last Sunday, the Sofia City Court announced that the trial in the civil case filed by the management has been launched, but it was postponed to February during the week over improper handling of documentation and subpoenas.

The labor unions have vowed to stage an effective,  mass, termless strike after the recent notice of the management of the heavily indebted state-owned railway company BDZ Holding that it intended to lay off 2 000 workers, and reduce the number of trains in operation by 150 (later scaled down to 138) by January 2012.