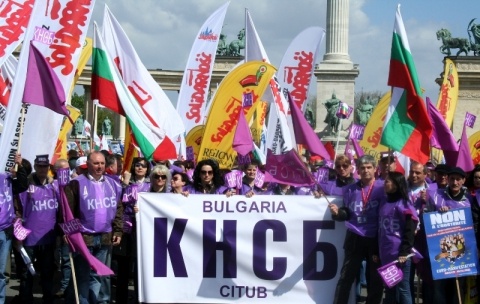 Wednesday's regular cabinet session which is to be held in Plovdiv will be overshadowed by protests of trade unions over pension system reforms. Photo by BGNES

The Cabinet will hold a regular session on Wednesday in the southern Bulgarian city of Plovdiv, the government's press office said in a statement.

The meeting will begin at 11 a.m in the building of the Regional Administration of Plovdiv.

After voting on a set of draft normative acts, the ministers will discuss regional topics with the mayors of the 18 municipalities in the district.

The Cabinet session will be accompanied by a protest of trade unions taking place in front of the same building.

The strike committee of the Confederation of Independent Trade Unions in Bulgaria (CITUB) and the Podkrepa Labor Confederation is holding a new protest rally with the participation of all categories of workers from the southern central region of the country.

The demonstration will be held against the changes to the pension system made without any dialogue with the trade unions.

Wednesday's protest will be a continuation of the national rally staged in front of the Parliament building two weeks ago.

The demonstration will bring together representatives of all types of workers that will be affected by the decisions of the Parliament and the government to increase the retirement age for all work categories from January 01, 2012 and the work experience required to make police and military personnel eligible for retirement.

After the amendments were passed with the the State Social Security 2012 Budget Act, outgoing President Georgi Parvanov vetoed them and the parliamentary budget committee will hold debates on them again on Thursday.

The trade unions have insisted that the MPs abide by the presidential veto and withdraw the amendments.

The new vote on the draft bill in the Plenary Hall has been scheduled for Friday.