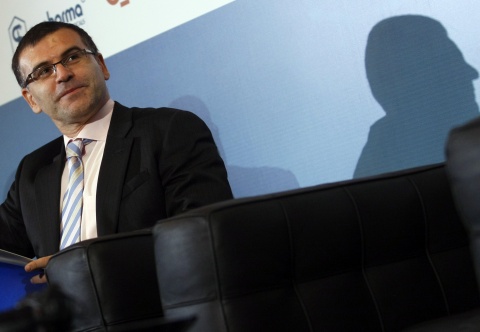 Bulgaria's Deputy Prime Minister and Finance Minister, Simeon Djankov, at the sixth meeting between the cabinet and the business "Europe Reload." Photo by BGNES

Bulgaria's Deputy Prime Minister and Finance Minister, Simeon Djankov, has assured the business sector that low taxes are to stay in Bulgaria.

Djankov stressed Tuesday that Bulgaria is one of the only three EU Member States with consistent tax, fiscal and microeconomic policies, the other two being Estonia and Luxembourg. Bulgaria also has the lowest tax rates in the EU.

The Minister spoke during the sixth meeting between the cabinet and the business, organized by the Confederation of Employers and Industrials in Bulgaria (CEIBG) under the motto "Europe Reload."

Djankov stated the cabinet did not raise taxes in order to preserve the country's competitiveness, which turned it into the one with the lowest tax burden in Europe - an achievement that would last.

PM, Boyko Borisov, joined in, saying that interference in tax policy is seen by the cabinet as in interference in the sovereignty of a particular country and Bulgaria is against it, apparently referring to the push by France and Germany for tax harmonization in the EU, or at least in the euro zone.

Bulgaria has viewed such a potential requirement as a threat to one of its key competitive advantages in the quest for FDI.

"If in 50 or 100 years, if the EU has a single Attorney General, Court, and police then we can discuss these plans for tax harmonization. But we will stay the course in participating in the Financial Stability Pact," Borisov pointed out.

Djankov vowed the cabinet will continue with strict fiscal discipline as a must for future economic growth, adding such growth will be seen, precisely for this reason, in 2012 and 2013.

"We are aware of the need of reforms, and when they are implemented in a timely manner – the benefits are evident, like in the Customs, where the reform led to increased revenues and decreased sales of illegal cigarettes. We also know what happens when reforms, such as the retirement one, are delayed," he said, pointing out that "the one loser from reforms is populism."

"Populism is attractive at first glance, but it does not work, especially in times of crisis. If you examine election results in Europe – at the beginning of the crisis they were 14 Socialist cabinets, now down to 2. Not that all Socialists are populists, but most make empty promises and then tumble," Djankov concluded, adding at the end people realize the best way to manage a country is the way the ruling party, GERB, is managing Bulgaria.