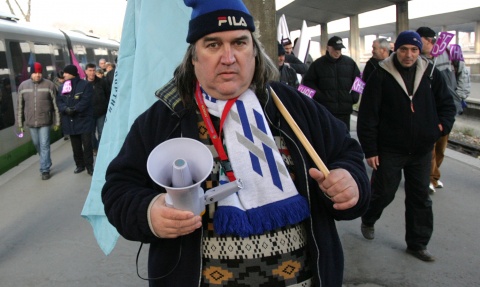 Bulgarian labor unions are staging a mass strike after recent announcement of the management of the state-owned railway company BDZ that it intended to lay off 2 000 workers by January 2011. Photo by BGNES

The syndicates and the management of Freight Services at the troubled Bulgarian State-owned Railways BDZ Holding have reached an agreement on the 20th day of the workers strike.

The news was reported by the leader of the BDZ labor union from the Confederation of Independent Syndicates in Bulgaria, KNSB, Petar Bunev, who, however, failed to elaborate on details and on the exact parameters of the agreement.

Talks between the syndicates and the management of Passenger Services continue at the BDZ headquarters.

Meanwhile, the company's press center reported that the train schedule at the Central Railway Station in the capital Sofia is getting back to normal.

Only 63 workers, employed by Freight Services, went on strike Tuesday.

Nearly all scheduled trains have departed on time. From the international ones, only the one to Bucharest had been halted because one of the ticket collectors was on strike.

A new train schedule became effective at midnight Saturday into Sunday and turned into grounds for the BDZ management to declare the strike illegal and threaten the striking workers with firings.

The BDZ management says the arbitrary decisions of the strike committees and striking workers, deemed by the latter agreements for transport services of the population in times of strike, are made and issued on the base of the old schedule. With the new one, these decisions are ineffective and any strike actions from Sunday on would not be based on any agreements.

Railroad stations across Bulgaria met the day Monday with an open letter from the management, posted on walls and windows, declaring the strike illegal and warning about dismissals.

The syndicates reacted immediately with a letter to the President, the Prime Minister and the Chief Prosecutor, insisting on guarantees for the constitutional right of Bulgarians and the 26 000 employees of BDZ and the National Company Railways Infrastructure to strike.

They say the management is threatening workers in violation of the law, without a Court decision on the legality of the strike. They stress the only way to resolve the issue is to sit on the negotiations table and not by manipulating people.

The BDZ Freight Services and BDZ Passenger Services did file a Court claim to declare the strike illegal. Last Sunday, the Sofia City Court announced that the trial in the civil case filed by the management has been launched, but it was postponed to February during the week over improper handling of documentation and subpoenas.

Initially, the management of the company and Transport Minister, Ivaylo Moskovski, promised that no one will be fired for taking part in the strike, even though they deem the action illegal.

The labor unions staged an effective,  mass, termless strike after the November notice of the management of the heavily indebted state-owned railway company BDZ Holding that it intended to lay off 2 000 workers, and reduce the number of trains in operation by 150 (later scaled down to 138) by January 2012.

The strike began on November 24.