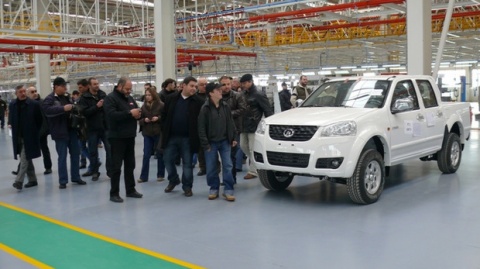 A Steed model pick-up, which is part of the test produce of the Litex and Great Wall Co plant in Bulgaria's Lovech displayed before journalists inside the factory. Photo by Litex Motors

On November 14, Litex Motors and Great Wall Motors already unveiled their first vehicle assembled in the plant near the northern Bulgarian city of Lovech, 16 years after Bulgaria's last failed attempt at car manufacturing.

The Litex Motors factory will formally be inaugurated at the beginning of 2012, featuring the latest top-notch equipment for car manufacturing, the company said.

During its assembly process each vehicle will go through seven control points on assembly line; and each vehicle model will tested on a track with 30 different surfaces near the plant.

Litex and Great Wall plant to expand their annual output to 50 000 cars, with the total employment figure at the Lovech plant planned to reach 2 000 people.

After the formal opening of the factory, Litex and Great Wall are to start their production for export markets, the company said.

To date, the Litex Motors plant has produced over 10 vehicles of the Volex and Steed brands as part of its testing period.

"Because of the large consumer interest the dealerships of Great Wall working with 13 offices around Bulgaria are offering imported vehicles since the number of requests [for the cars to be produced at Lovech] has reached over 200 since September," Litex Motors said.

The company points out that its vehicles have "top equipment, top prized, 5-year warranty, and tax credit."

For its petrol-engine vehicles, the company also offers modifications for switching to methane that preserve the power of the engine but reduce fuel costs by 70%.

In that respect, Litex Motors is to partner with a leading LPG Systems producer – Dutch company Vialle.