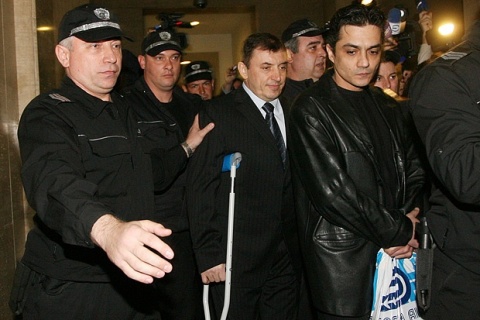 The indictment against alleged organized crime boss Alexey Petrov has reached court after close to two years of investigation. Photo by BGNES

The first session in the notorious Bulgarian "Octopus" case is beginning in the Sofia City Court on Monday, December 12.

Rumyana Chenalova is chairing the team of magistrates, who will try the case.

The indictment was filed on November 7 with the Sofia City Court and came as a somewhat a surprise since the expectations were that case will be tried by the new special or "anti-mafia" tribunal, which has been set to work on high-profile corruption and organized crime cases through a speedy procedure.

Experts say that if on Monday the magistrates postpone the case for January, when the special tribunal will start functioning, the trial could be moved there.

The indictment against former employee of the State Agency for National Security, DANS, murky businessman and alleged crime boss Alexey Petrov was filed by the prosecution following an investigation of close to two years.

Petrov, together with five other people, including former prosecutor Tseko Yordanov, Marchelo Dzhotolov and Anton Petrov - aka "Hamstera" (i.e. "The Hamster") are facing charges of racketeering and extortion.

Petrov was arrested on February 10 2010, in a special operation codenamed "Octopus".

The Interior Ministry said at the time that it had bust a very powerful, exceptionally well organized and hierarchically structured crime ring that had been functioning since 1997.

Asked to account for the significant delay of the indictment in July 2011, the prosecutor assigned to the case, Svetlozar Kostov, said that the step required the processing of a huge load of documents which had been seized during the Octopus operation.

At that point Kostov declared that it was impossible to solve the case with one trial and opened two trials against a total of 25 defendants, deploying a team of three prosecutors.

Petrov was set free in October 2010 after spending 8 months under arrest.

The court ruled that there was no evidence of Petrov's alleged leadership of an organized crime group and placed him under house arrest.

In February 2011, the magistrates decided to apply a less restrictive measure of remand, signed promise of appearance.

Petrov ran for President in the end-October elections but scored only 0.95% of support (30 955 votes).

Petrov was voted top presidential runner at only one polling station, the one at the Bobovdol prison.