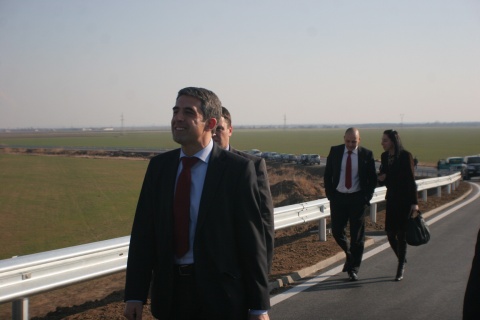 Bulgaria's President-elect Rosen Plevneliev has promised that he is well-intentioned and wants to help the country.

In an interview for Nova TV Sunday afternoon Plevneliev, who won the 2011 presidential elections and is to be inaugurated as Bulgaria's fourth head of state in January 2012, outlined a number of reforms that he wished to see through.

"The grand slam for me doesn't consists of three big projects but of three big priorities – energy efficiency, energy independence, and energy liberalization," the President-elect said alluding to the popular phrase uttered by outgoing President Georgi Parvanov that the three Bulgarian-Russian energy projects – the Belene nuclear power plant, the South Stream gas transit pipeline and the Burgas-Alexandroupolis oil pipeline – were a "grand slam for Bulgaria."

Plevneliev said he was not concerned that the Bulgarian Constitutional Court might declare the presidential election results null and void – as the Socialist opposition requested based citing irregularities with the ballots.

"I am not worried that somebody will be telling me I'm overstepping my rights because I am well-intentional, I want to help, and I have a lot to give," stated the new President, blaming in advance any potential failures on part of the other state institutions to take up the future good ideas of the Bulgarian Presidency on themselves.

According to Plevneliev, the most pressing spheres that need reform are the retirement system, state administration and healthcare, where he said the introduction of an electronic health card would save BGN 4 M per year.

He commented on the ongoing strike at the Bulgarian State Railways BDZ and the farmers' protests by referring to the hardship in all over Europe.

"Europe had a great problem because rules weren't obeyed there. The current European crisis is caused by lack of trust. Some of the states ordered in the European restaurant more than they could pay for. The rules to be introduced are clear – you spend as much as you can afford. If not, the great feast is followed by a great diet, as already happy with many countries," Plevneliev stated, expressing his concern that 2013 will be as hard as 2012 because of the need for austerity.

He promised a new website of the Bulgarian Presidency as part of his efforts to have better communication with Bulgarians at home and abroad.

"I want to be a unifying factor. I will post all of my promises on my website in order to be honest before the Bulgarians," Plevenliev explained.

He did mention also that he is hearing less and less of Prime Minister Boyko Borisov, and that probably talks to the PM and leader of the ruling GERB party - on whose behalf Plevneliev won the Presidency - about once every two weeks.