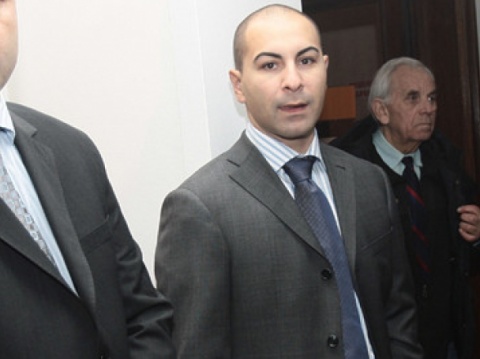 Bulgarian weightlifter and Olympic champion, Galabin Boevski, was arrested in Ocotber for cocaine posession in Brazil. Photo by BGNES

Galabin Boevski, who was detained at the end of October in Brazil and accused of carrying nine kilos of cocaine in his luggage, gave his first interview in Bulgaria, reiterating he was completely innocent.

Speaking Sunday for the Bulgarian National Television, BNT, from his prison cell, on the 48th day of his arrest, he said that he never did anything but sports, and vowed he will leave jail and become Olympic champion at the summer Olympics in London in 2012.

Galabin Boevski, 36, a Bulgarian Olympic weightlifting champion, was arrested on October 24th for possession of 9 kg of cocaine at the Guarulhos Airport in Sao Paulo, Brazil. The drug was found hidden in special secret compartments inside his suitcase.

He was first sent to a temporary prison facility and a week later – to a special jail for foreigners where he sleeps on the cell's floor with four other Europeans and six people from South American countries. He told BNT he didn't have any problems with his cellmates or with the prison guards.

"Everything else could be overcome, but to sit in jail without any guilt, this could kill. And everything progresses at such slow speed, and until they finish this probe, I will sit here. I hope to be released so that I can help the investigation. With my lawyers we think non-stop what and how could have happened," the weightlifter said.

The BNT interview was realized with the help of the Brazilian newspaper "Agora Sao Paulo.

"I did not have anything in my bag; I purchased three empty suitcases. I have never seen such thing in my life. When police came, I thought it was a routine check; I was never ever involved in any crime. I cried then because sports are my entire life and I do not need to violate the law. I believed they will investigate and let me go, but I ended here," he explained.

Ever since his arrest Boevski has claimed that he bought the brand new suitcases from a shop in Sao Paulo and did not know about the cocaine.

In the interview, the former Olympic champion further complained of having nothing to do in jail since he is not allowed to take classes or work because he had not been sentenced.

"All this time I never stopped thinking. For me the biggest problem is that my good name, my image I built for years were tarnished. I have a good life and a good business; I don't need to do such things. I am popular all over the world – I must be insane to do it. I have plenty of money do live well without getting involved in such stupid things," Boevski pointed out in the interview.

Boevski's wife Krassimira left over the week on her second trip to Sao Paulo to see her husband, bring him Christmas presents and important documents to prove he has not commit any crimes so far and is not likely to hide if extradited to Bulgaria.

His lawyer, Ivaylo Dermendzhiev is determined to press for extradition and eventual trial in Bulgaria, citing the International Convention on Psychotropic Substances, which the two countries have signed and which has supremacy over state laws.

The lawyer's statement clashes with the opinion of Bulgarian high-ranking officials, who have ruled out the extradition of Galabin Boevski to his home country, saying there is no prisoner transfer agreement between Bulgaria and Brazil.

There is still no indictment against Boevski.

It was reported meanwhile that a mysterious photographer may turn out to play a crucial role in the expected trial against the former Olympic weightlifting champion. The defense is trying to contact the photographer, who was in Sao Paulo to cover the table tennis tournament, in the hope that he will confirm Boevski purchased the ill-fated suitcases in Brazil.

If found guilty no matter whether in Bulgaria or Brazil, Boevski could face up to 15 years in prison.

The 36-year-old Boevski won the gold medal at the 2000 Sydney Olympics in the 152-pound category. He was banned for eight years by the International Weightlifting Federation for doping in 2004. He owns a chain of modern fitness facilities in the capital Sofia and has a number of other businesses.