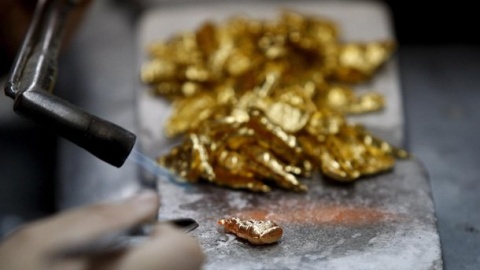 According to preliminary data, the Rakitovo deposit has 7 tons of gold and 100 tons of silver; the one in Tran - 100 tons of gold – both discovered in Bulgaria by the Canadian "EuroMax Resources." Photo by BGNES

Two deposits of gold, whose geological reserves are estimated at over 100 tons, were found near Tran and Rakitovo, announced the Bulgarian Ministry of Economy, Energy and Tourism.

The deposits are studied and developed by two subsidiaries of the Canadian "EuroMax Resources."

"Trace Resources" work near the Pazardzhik municipality of Rakitovo and" EuroMax Services "- near Tran, in western Bulgaria.

Both companies have studied the precious metals there for seven years now and have asked the Ministry of Economy and Energy to officially record and register the geological discoveries, said Ivailo Iliev from the "Natural Resources and Concessions" Directorate.

The registration of geological discoveries will allow the companies to continue research activities for another year, and once samples from shafts are refined - to request registration of commercial discovery. It can be for smaller amounts, but it could turn out that the deposits are larger than current estimates. The registered commercial discovery will enable the companies to apply for concessions for extraction.

Currently, only one gold mine operates in the country - near Chelopech, by the company "Chelopech Mining" of the Canadian "Dundee Precious Metals." The company, however, is conducting further studies to expand the extraction of precious metals there. "Dundee" extracts annually about 1.5 million tons of mixed copper-silver-gold ore from which the flotation plant at the mine makes a concentrate that is sent for processing and extraction of gold in Namibia.

In the beginning of December, Bulgaria's environmental organizations challenged in court the decision of the environment minister to grant a go-ahead to Dundee Precious Metals' plans for a big open-pit gold mine near the town of Krumovgrad. Local residents also staged protests against the decision.