Tens of Thousands March in Moscow against Allegedly Rigged Elections 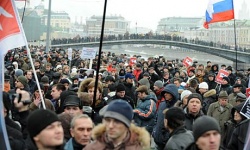 Tens of thousands have hit the streets of Russia's capital Moscow to protest what they perceive as electoral fraud on behalf of Prime Minister Vladimir Putin and his party.

Some 50 000 people have gathered at Moscow's Bolotnaya Square, according to latest estimates. Nationalists have been seen burning United Russia flags.

A footbridge leading to the site of the protest was so overloaded with people that it was in danger of collapsing and police authorities had to clear the bridge, it has been reported.

Other cities across the country have also seen protests in what has been described by the media as the largest public show of discontent  since the fall of Soviet Russia.

There have been clashes in St. Petersburg, with riot police dragging away protesters, CBS News informs.

Putin's pro-Kremlin United Russia party kept its absolute majority in the lower house of the Parliament, the Duma, after Sunday's parliamentary elections, even though it lost some seats.