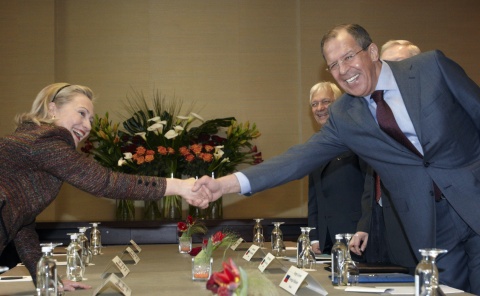 US Secretary of State Hillary Clinton (L) shakes hand with Russia`s Foreign Minister Sergei Lavrov (R) at the start of a bilateral meeting in Geneva, Switzerland, on 28 February 2011. EPA/BGNES

"If we agree on the missile defense issue, it would be much easier for us to make a positive decision about the summit. We do not know whether or not we will agree," Ryabkov said in an interview with the state-owned Rossiya 24 television, as cited by RIA Novosti.

Ryabkov's statement comes a day after NATO and Russia made clear their disagreement at the annual meeting of NATO Foreign Ministers followed by a meeting of the NATO-Russia Council.

He added that Russia and the United States would continue talks but in any case, no decision will be made before presidential elections scheduled for March 4, 2012, he said.

The forthcoming summit in Chicago is the next strategic event on the NATO-Russian calendar following the 2010 Lisbon Summit, when both sides agreed to cooperate on the European missile defense shield.

However, the negotiations have stalled since then over differences in approaches, RIA Novosti reminds.

Moscow considers the NATO-backed missile defense program a direct threat to its strategic potential and demands written guarantees that the shield will not be targeted against it.

According to the Russian position, the United States refuses to provide the guarantees, saying the shield is directed against threats from Iran and North Korea.