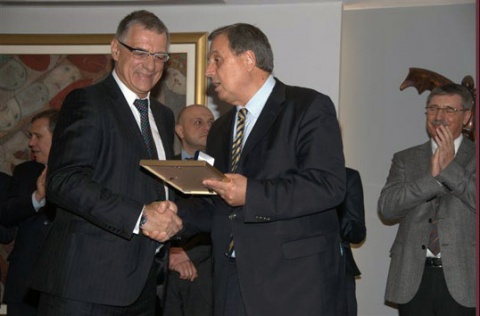 ABB in Bulgaria has been awarded the Gold Medal of the Bulgarian Industrial Association for its contribution to the economy in the country.

ABB in Bulgaria got "The Gold Medal and Certificate", by the Bulgarian Industrial Association, for the company's "outstanding investment and contribution to innovation within its production units in Bulgaria."

The Certificate was handed over to Peter Simon, Country Manager for ABB in Bulgaria, Romania and Moldova, for the company's implementation in Bulgaria of last generation robotized production lines for the manufacturing of electrical apparatus, as well as for the increasing of the ABB jobs in Bulgaria by 200% compared to 2009.

A total of 15 companies participated in the contest for BIA's IN-5" awards for Industry, Investment, Innovation, Intelligence and Initiative.

"We are proud of ABB being acknowledged for the Golden Medal award by the Bulgarian Industrial Association. The fact that innovation, investment and intelligence are appreciated represents a positive sign for Bulgaria as a basis for efficient manufacturing and for further investment," said ABB manager Peter Simon.

ABB operates in Bulgaria through three companies in five locations, employing a total of over 1000 employees.

The three ABB production units in Bulgaria are located in Petrich, Sevlievo and Rakovski. The ABB Group of companies operates in around 100 countries and employs about 130,000 people.