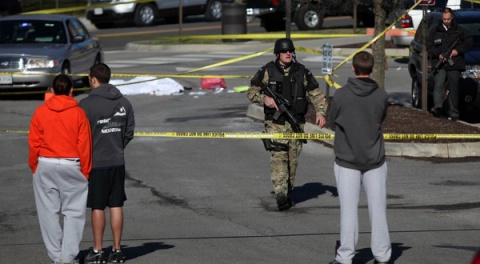 The crime scene at Virginia Tech sealed off after the new shooting incident. Photo from the NYT

The USA has been shocked by a new shooting killing two men on the campus of Virginia Tech University.

The new shooting comes nearly five years after the massacre at Virginia Tech that was the deadliest ever on a school campus, when the perpetrator, a student, Seung-Hui Cho, killed 32 people and wounded 25 others before he committed suicide.

One of the two men killed in the new Virginia Tech shooting incident on Thursday is a campus police officer.

The police officer, Deriek W. Crouse, 39, of Christiansburg, Va., was shot at close range by a man who had walked up to him as he was making a traffic stop in a campus parking lot, the police said, as cited by the NYT.

Officials did not identify the gunman, but in a conference call with reporters on Thursday night, Virginia Gov. Bob McDonnell and state police officers said the evidence was strong that he was the second dead man, whose body was found in a parking lot about a quarter-mile away from the traffic stop.

"We have recovered clothing items that would lead us to believe that he would be one and the same," said Maj. Rick Jenkins, deputy director of the Virginia State Police's bureau of investigation. But he added, "We are not in a situation to say that definitively at this point."

The killing of Officer Crouse, an Army veteran with five children, happened around noon and was captured on video by a camera that had been mounted on his car dashboard. Officials said they believed the gunman had acted alone in killing Officer Crouse.

Several Virginia Tech officials rushed back to campus after spending much of the day in Washington where, by coincidence, the university was appealing a USD 55 000 fine levied by the Department of Education for waiting too long to notify students after the 2007 attack.