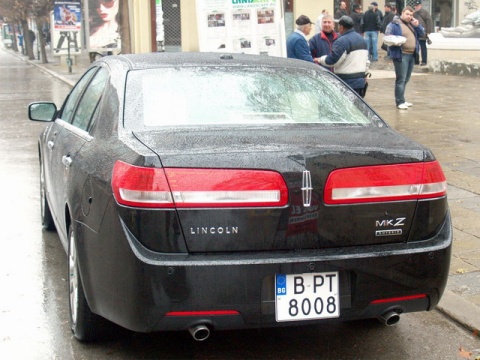 A picture of the brand new "Lincoln MKZ Hybrid" - model 2012 that has been delivered specially for Bulgarian Bishop Kiril, before coming on the market. Photo by DarikNews

The Varna and Preslav Bishopric are denying information that the Bishop of Varna and Veliki Preslav, Kiril, has resigned from his post a day after he startled his congregation with a 2012 Lincoln MKZ Hybrid.

Speaking for the Bulgarian National Radio, BNR, Kiril informed that he had quit his job late Wednesday, citing "dissatisfaction with the management of the Holy Synod of the Bulgarian Orthodox Church" as the reasons for the resignation.

"Very often high-ranking clergy make a decision only to immediately revoke it or not carry it in reality. I attend regularly the Synod's meetings, but it is a waste of time. At the last such meeting I told them I didn't want to be a Bishop anymore," Kiril is quoted saying.

However, many in Bulgaria have been quick to suggest that the Varna Bishop – who is known to have harbored hopes to become Bulgaria's next Patriarch after the current head of the Bulgarian Orthodox Church, Patriarch Maxim – has caused a scandal with his luxury limo, which might be the real reason for his resignation.

Bishop Kiril arrived Tuesday for a service at the St Nikola church in the Black Sea city in a brand new "Lincoln MKZ Hybrid" - model 2012. The vehicle is not offered on the Bulgarian market and is possibly the first such model in the country.

The car is the first hybrid vehicle of Lincoln. It provides top-notch luxury with a real-wood interior and seven safety technologies. In the US its starting price is about USD 35 000. It is considered to be the most luxurious hybrid vehicle in America.

Until now the Bishop used a French Peugeot, but says he had to get rid of it over high gas consumption.

"This car has been delivered especially for me, before coming on the market. Only the American President uses such model," Kiril bragged, pointing out he was not afraid of audits, because the car had not been purchases with Church money.

"Some friends of mine gave me money for it. They bought it. I didn't want it but they insisted. It is a hybrid, and a new model. They brought it from America. I haven't paid anything, they gave it to me. The Bishopric hasn't paid a cent. The Bishopric is paying for the fuel. My previous car spent lots of gas – it was a Peugeot," explained Tuesday the 57-year-old Kiril, as quoted by BGNES.

The news site dir.bg quotes Thursday own sources, saying that the rules of the Bulgarian Orthodox Church do not provide for a Bishop to resign, except under very extreme circumstances.

The Holy Synod is yet to offer any official information on the case.

According to sources of the Bulgarian Dnevik, the vehicle had, most likely, been purchased by a firm named "Amira 2010." Its owners are listed as Yuliyan Gendov and Danail Dobrev. Gendov is a member of the Bishops Council at the Varna and Preslav Bishopric.

A check of the Business Registry had shown that the company is involved in a large number of activities such as radio and TV programs for cable TV, tourist services, and grain trading.

The cell phones of the two owners, however, are inaccessible while the company's office at the listed address in downtown Varna is closed and it does not seem to have ever been opened, a visit of a reporter from bTV had revealed.