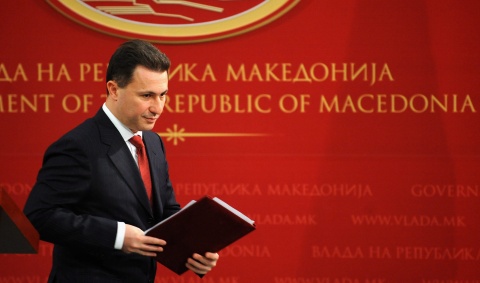 Macedonian Prime Minister Nikola Gruevski leaves a news conference after addressing journalists after The Hague International Court of Justice has ruled that Greece has breached its obligation under Article 11 of the 1995 Interim Accord. Photo by EPA/BGNE

Greece will continue opposing its neighbor Macedonia from entering international organizations under that name, even though UN's highest court ruled Monday that Athens was wrong in objecting to Skopje's NATO bid in 2008.

"Greece will continue to pursue negotiations in good faith to reach a mutually acceptable solution on the name of the former Yugoslav Republic of Macedonia, within the spirit and letter of the relevant resolutions of the Security Council and the General Assembly of the United Nations," the Greek Foreign Ministry said in a statement, as cited by DPA.

"Greece has supported the European perspective of Skopje in many cases," Greek PM Lucas Papademos has commented. "The condition, however, for full normalization of relations is a mutually acceptable solution to name issue," he has added.

On Monday, the court found that Greece's informal veto in 2008 violated a provisonal 1995 deal under which the Balkan country had agreed not to object to ?acedonia's membership in international oanizations if it used the name "The Former Yugoslav Republic of Macedonia," or Macedonia, while the matter was submitted to further negotiations.

NATO's position will not be affected by the ruling, NATO Secretary General Anders Fogh Rasmussen has stated. According to Rasmussen, the former Yugoslav Republic of Macedonia would only be extended  "as soon as a mutually acceptable solution to the name issue has been reached."