Bulgaria PM: Up to Journalists to Put Media Market in Order 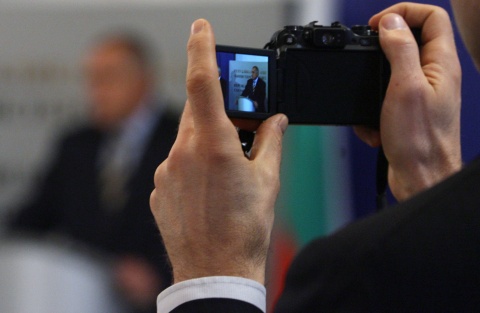 In a bid to deny allegations of being the darling of the biggest media group on the local market, Bulgaria's prime minister has come up with a few interesting, but inapplicable pieces of advice to journalists.

"All journalists must in the first place be guided by their moral and journalistic ethics and values. If you for example order your staff to do things they do not approve of, they all should resign," Boyko Borisov said on Sunday in an interview for K2 radio station.

"Let's imagine that fifty journalists from different media quit their jobs and pool their efforts. They can collect money or take a credit and found a new newspaper. If this newspaper is truly objective, in five months it will turn into the most popular media in the country and the journalists will start to capitalize on their investments," Borisov said.

The statement came in response to the anchor's pressing questions, which sounded an alarm over the lack of clarity in the ownership and financing of part of the media in the country, which in her words undermine the market.

"As a democrat I believe that the journalists themselves have to fight for clear rules on the media market. It is not the government, but the owners of the media who encroach on the freedom of speech," said Borisov.

Asked whether he has ever commissioned an article, he said:

The statement is in stark contrast with the opinions of experts in political science and mass communications, who have been warning that Bulgarian media trends are extremely alarming.

The pressure on Bulgarian media continues, both political and economic, leading to journalism's self-censorship, experts say. Their findings have been confirmed by the Assembly of the Council of Europe and the study of "Freedom House," which ranks Bulgarian media 76th from a total of 196 countries by media freedom.

The beginning of August saw the expansion of the monopoly after one third of the shares of top Bulgarian daily Standart were, allegedly, bought by New Bulgarian Media Group, something the management of the daily firmly denies.

According to them Ahmed Dogan, leader of the Bulgarian ethnic Turks, largely known over the last decade as the country's back seat ruler, stands behind the monopoly on the local media market.