Millions of Russians Go to Polls to Elect New Parliament 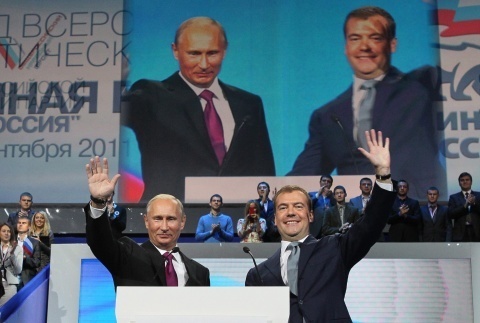 Russians are voting Sunday to elect 450 Members of the lower house of the Parliament - Duma, for the next five years.

The outgoing parliament, or State Duma, is controlled by Prime Minister's Vladimir Putin's United Russia party, which has 315 seats, with seats also held by the Communist Party, the nationalist Liberal Democrats and the social-democratic Fair Russia. United Russia will score a certain victory this time around as well, but recent polls show some dropping in popularity and signs of fatigues from the system Putin imposed in 2000.

The Sunday vote takes place across Russia's nine time zones with polls closing at 17:00 GMT on Sunday in Kaliningrad. As people in European Russia were going to bed, polls were opening in the Far East.

Presidential elections will be held on March 4, when Putin will run and certainly win, after having served two previous terms in the post.

Without naming United Russia, he urged voters to choose "responsible politicians, who can help improve our people's living standards in practice, and who will be guided in their actions by the interests of voters and national interests".

According to BBC, there have been allegations of violations of election law, many of which malpractice involved United Russia, with the country's only independent monitoring group, Golos (Voice), logging 5 300 complaints.

On Friday, Golos was fined the equivalent of USD 1 000 by a Moscow court for violating a law that prohibits publication of election opinion research for five days before a vote.

Golos head Liliya Shibanova said officials had taken her laptop at Moscow airport on the pretext that it had illegal software.

"This is a provocation directed personally against me," she said, alleging that the authorities were trying to prevent her from travelling to the European parliament next week.

Meanwhile Putin has accused foreign powers of meddling in election preparations. Duma members have also questioned why a foreign-funded organization is allowed to monitor Russian elections.

The Golos monitors, who are not affiliated with any party, are funded largely by the US and EU.