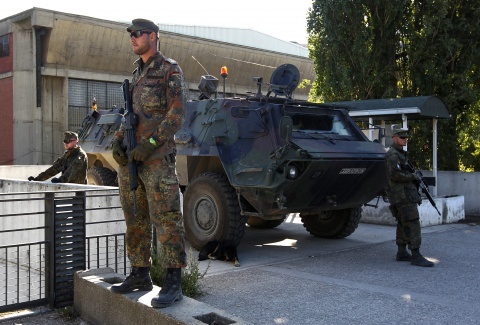 German NATO peacekeepers during a patrol on the main bridge of the ethnically divided town of Mitrovica, Kosovo, 30 September 2011. EPA/BGNES

Representatives of Serbia and breakaway Kosovo have reached a last-minute agreement late Friday for the joint monitoring of their common border.

Border checkpoints of Brnjak and Jarinje have been blockaded since the summer by ethnic Serbs living in Northern Kosovo, who do not recognize the unilateral declaration of independence by the province.

This has led to tensions with NATO KFOR units, which have attempted to restore the authority of the Pristina government over its border with Serbia, resulting in dozens wounded from both sides.

"The parties reached an agreement on the EU-developed concept of integrated management for crossing points. This means that the parties will gradually set up the joint, integrated, single and secure posts at all their common crossing points," the EU said in a statement.

However, the BBC adds that Serbian negotiator Borko Stefanovic said some details remained to be worked out.

Serbia has been pressed by EU member states to reach progress in talks with Kosovo, if it still wants to get an official EU candidate status at the European Council upcoming Friday, December 9.