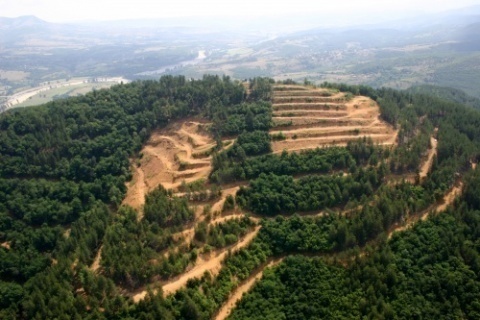 A total of 27 tons of gold lie hidden below the prominent Ada Tepe hill, according to estimates of Canadian mining company Dundee Precious Metals. File photo

Bulgaria's environmental organizations have challenged in court the decision of the environment minister to grant a go-ahead to Dundee Precious Metals' plans for a big open-pit gold mine near the town of Krumovgrad.

"The decision of the environment minister is not acceptable and does not protect the interests of the state, the society and the nature," according to the organizations "Balkans" and "For the Earth".

They submitted on Thursday a joint complaint to the Supreme Administrative Court against the ministerial green light for the controversial project.

Earlier in the week the people living in the poor Bulgarian town of Krumovgrad have resumed their vehement protests against plans by Canadian mining company Dundee Precious Metals to open a big open-pit gold mine, spurred by the worldwide gold rush.

The fierce opposition of the local community comes days after Bulgaria's Minister of Environment and Waters provisionally granted Dundee Precious Metals a go-ahead, signing a resolution that approves the environmental impact assessment ("EIA") for the company's Krumovgrad gold project.