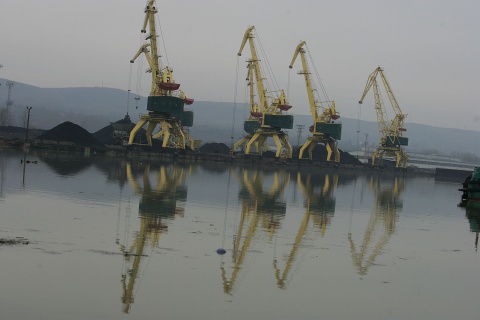 Vessels cannot approach Port Lom because of the low level of the Danube. Photo by BGNES

One of the major Bulgarian river ports, Lom on the Danube, has curtailed the working day of its employees from 8 to 4 hours because the record low level of the river has affected badly its business activities.

The harsh measure was adopted after heated discussions and will be rescinded as soon as the Danube level goes up, Bulgaria's Transport Ministry announced.

Danube's waters have hit a record low over the past two weeks which has almost completely blockaded the commercial navigation of the great European river.

The Danube level at Port Lom is only 70 cm above the zero mark, which is why the port cannot process any cargo and freight shipments.

"Because of that the port cannot provide full time employment of its 213 workers at Port Complex Lom EAD. There is no decline of freight amounts but because of the low level of the Danube the vessels cannot reach the port," the Bulgarian Transport Ministry explained.

Since the beginning of 2011, Port Lom has been processing an average of 35 000 metric tons of freight month, consisting primarily of metals, fertilizers, grain, and coal.

Port Lom is still expected to end 2011 with a profit regardless of the extremity with Danube's low levels in November, the government says.