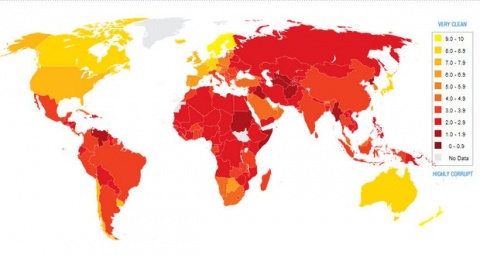 The countries represented in darker red are perceived to be highly corrupt, according to Transparency International's CPI

Bulgaria is the most corrupt among the EU Member States, according to Transparency International's newly published Corruption Perceptions Index (CPI).

The Balkan country has registered a score of 3.3, which has placed it 86th out of 178 countries together with Jamaica, Panama, Sri Lanka and Serbia. Bulgaria's corruption index has been worsening ever since 2009 when it had 3.8 points out of 10 (10 indicating "very clean" and 0 indicating "highly corrupt").

Bulgaria is now last among a total of 30 countries in the EU and Western Europe region, scoring a little worse than neighboring Greece (3.4).

New Zealand, Denmark and Finland top the list, while North Korea and Somalia are at the bottom.

The Corruption Perceptions Index ranks countries and territories according to their perceived levels of public sector corruption. It is an aggregate indicator that combines different sources of information about corruption, making it possible to compare countries.

No region or country in the world is immune to the damages of corruption, the vast majority of the 183 countries and territories assessed score below five on the scale, Transparency International points out.