Bulgaria to Make Major Withdrawal of Afghanistan Troops by 2014 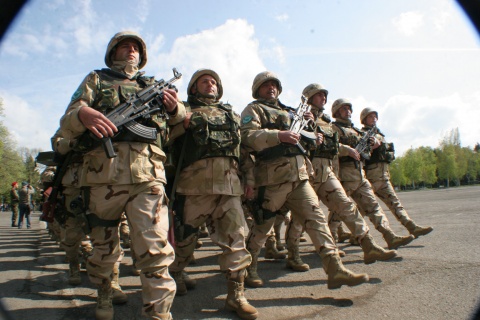 Bulgaria currently has about 600 troops in Afghanistan stationed in Kabul, Kandahar, and the Herat province. Photo by BGNES

Bulgaria's government has decided in favor of a major pullout of the Bulgarian troops stationed in Afghanistan, Defense Minister Anyu Angelov announced after Wednesday's Cabinet sitting.

Thus, Bulgaria will bring home three-fourths of its more than 600 troops currently serving within NATO's ISAF mission, under a newly adopted document with the lengthy title "Strategy for the Transformation of the Participation of the Armed Forces of the Republic of Bulgaria in the NATO-led International Forces in Afghanistan."

Gen. Angelov told journalists the Bulgarian withdrawal from Afghanistan will be carried out in three phases:

the two Bulgarian medical teams in the province of Herat will be brought home by the end of 2012;

the Bulgarian company currently guarding the airport in Kandahar will follow suit by the end of 2014.

This withdrawal time frame roughly appears to coincide with the US plans for transferring the security responsibilities in Afghanistan to the Afghan security forces by 2014.

After 2014, Bulgaria still plans to be involved in Afghanistan by participating in the training of the Afghan security forces, the Bulgarian Defense Minister explained.

Angelov further told reporters in Sofia that Bulgaria had no plans of sending in a battle group in Afghanistan.

He himself made a statement back in 2010 that Bulgaria might send a battle group, which, according to media reports, nearly cost him his post; Bulgaria's forces in Afghanistan – not unlike those of the majority of the ISAF countries – have had a support role of patrolling and guarding in Afghanistan.

Bulgaria has not lost any troops in Afghanistan to date (unlike Iraq where it lost 13 men) but in January 2010 four Bulgarian soldiers got seriously injured in a Taliban rocket attack on Kandahar Airport, one of them losing his hand.

Angelov did add, however, that with the certification of the first out of a total of six Bulgarian battalion groups by the end of 2012, the government will complete the first phase of the modernization of the Bulgarian Army, i.e. land forces, according to the 2020 Investment Plan.