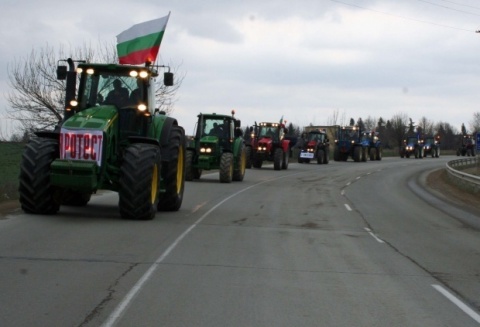 Bulgarian farmers are taking on the roads thousands of machines in sign of protest against budget cuts. Fhoto by BGNES

Hundreds of farming equipment and machines are piled up at the cross border checkpoint Capitan Andreevo on the Bulgarian-Turkish border.

The news was reported Tuesday by the Bulgarian National Radio, BNR.

The improvised camp of 330 machines of farmers from the southern cities of Haskovo and Stara Zagora will remain at the border at least this Thursday. The machines are guarded over night by a private security firm.

Each year farmers receive EU subsidy, which is determined by the size of their land. The amount slated for 2012 is over BGN 830 M. There are also BGN 110 M in the State budget for grain producers, BGN 71 M for animal keepers and BGN 73 M for tobacco growers.

Grain producers, however, demand another BGN 230 M in the national treasury. The discontent escalated after the passing in the Parliament, at first reading, the draft 2012 budget, where the amount was lower than what was promised by these BGN 230 M. A month before the October 23 local and presidential elections, the cabinet and the farming associations signed a financial frame, which included BGN 570 M for the farming sector.

The farmers accuse Deputy Prime Minister and Finance Minister, Simeon Djankov, of suffering from amnesia and discarding his own signature.

The demonstrators threaten to block borders and roads if their demands are not fulfilled. They say they are ready to come and paralyze the capital Sofia on December 1.

In addition to Haskovo and Stara Zagora, farmers from the Plovdiv, Yambol, Sliven, Burgas, Ruse, Vratsa and Vidin regions are protesting Tuesday. Machines are piled up at many locations and blockades are expected to begin later during the day.