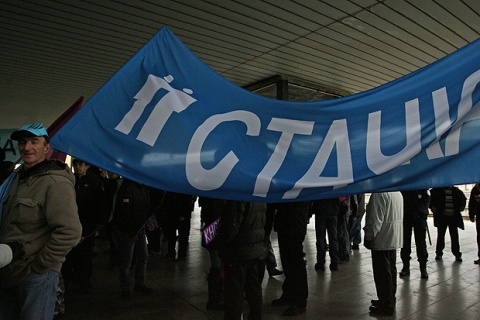 Bulgarian labor unions are staging a mass strike after recent announcement of the management of the state-owned railway company BDZ that it intended to lay off 2 000 workers by January 2011. Photo by BGNES

The effective mass strike of workers at the troubled State-owned Railway Company BDZ Holding is continuing Tuesday for the sixth consecutive day.

Passenger and freight trains will be halted between 8 am and 4 pm.

The strike is termless. The labor unions are adamant the strike will continue until an agreement is reached with the BDZ management. They demand the signing of a class labor contract under the same parameters as before the announced start of the reform.

According to syndicates' data, 80% of passenger trains were halted across the country Monday. The losses for BDZ so far are estimated at nearly BGN 0.5 M.

The syndicates blame the management of BDZ and the National Company Railroad Infrastructure in applying "lockout" to the strike and replacing striking workers with others without the needed qualifications. They are appealing to more workers to join the strike.

The management of the company and Transport Minister, Ivaylo Moskovski, promised that no one will be fired for taking part in the strike, even though they deem the action illegal.

The labor unions vowed to stage an effective,  mass, termless strike after the recent notice of the management of the heavily indebted state-owned railway company BDZ Holding that it intended to lay off 2 000 workers, and reduce the number of trains in operation by 150 (later scaled down to 138) by January 2012. In addition, ticket prices along state-subsidized routes will be increased by 9% as of January 1, 2012, and those of "business trains", i.e. the handful of profitable railway routes in Bulgaria – by 15% as December 1, 2011.

The strike began on November 24