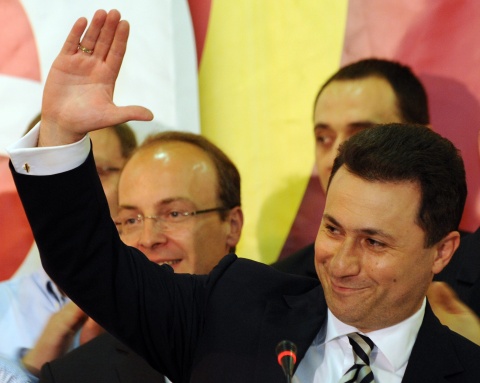 Macedonian Prime Minister Nikola Gruevski greets the supporters of the ruling VMRO DPMNE party during celebration of their victory in parliamentary elections, in Skopje, The Former Yugoslav Republic of Macedonia on 05 June 2011. EPA/BGNES

In a letter to Greek PM Lucas Paparemos, Gruevski has pointed out that a potential Greek vote in favor of starting EU accession negotiations with Macedonia would boost "the European integration of the whole Balkans region."

According to Gruevski, the accession talks would further help Macedonia and Greece solve their name dispute. The past has shown that "negotiating processes are always encouraging for overcoming bilateral challenges," the Macedonian Prime Minister has pointed out, as cited by eubusiness.com.

Macedonia continues to have no date for starting the EU talks as the Council of the European Union has repeatedly put off grating the country a date, largely because of its name dispute with Greece.

UN's International Court of Justice is going to make its ruling on the Macedonia-Greece name dispute on December 5 2011, it was announced last week.