Bulgaria's President-elect: Reforms Have No Alternative 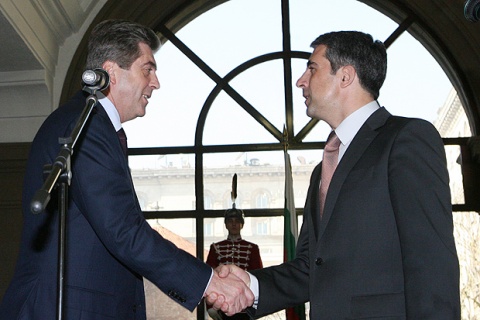 Bulgaria must stay the course of reforms in the social sector because there is no other way to deal with the crisis situation, believes President-elect, Rosen Plevneliev.

"Reforms have no alternative. We need a responsible approach in order to find the right solutions. We must not undermine stability, otherwise we will score a big own goal and face unpredictable consequences," said Plevneliev.

He spoke after his first official visit with outgoing President, Geogri Parvanov, at a joint briefing the two gave after the meeting. Plevneliev vowed regular press conferences once he takes office and full access of journalists to current issues on his agenda.

The President-elect stressed the need of communication and dialogue in the current social situation, where the country is shaken by protests and strikes, otherwise all Bulgarians would have to pay for it from their pocket.

"If I have to choose between a responsible approach or the arrival of the International Monetary Fund, IMF, to impose their own rules, I choose the first, if for nothing else for our self-esteem of knowing what needs to be done," he said when asked to comment on surprising recent plans of the cabinet to increase in 2012 retirement age for both men and women by one year.

Plevneliev pointed out the upcoming several weeks will be crucial for all institutions and reforms and will determine the long-term future of the country.

Plevneliev, who in October won the post on the ticket of the ruling, center-right Citizens for European Development of Bulgaria party (GERB), is going to be inaugurated on January 22, 2012.

Meanwhile, Parvanov confirmed his plans to impose a veto on the retirement system reforms, saying social tensions are very strong and will rather keep growing, affecting politics and society.

The outgoing President denied reports the two met secretly earlier, saying that not all meetings where media is not present are secret.