Bulgarian Town Rises in Revolt against Dundee Plans for Gold Mine 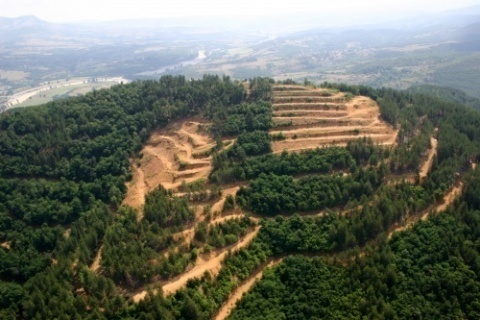 A total of 27 tons of gold lie hidden below the prominent Ada Tepe hill, according to estimates of Canadian mining company Dundee Precious Metals. File photo

The people living in the poor Bulgarian town of Krumovgrad have resumed their vehement protests against plans by Canadian mining company Dundee Precious Metals to open a big open-pit gold mine, spurred by the worldwide gold rush.

The fierce opposition of the local community comes days after Bulgaria's Minister of Environment and Waters provisionally granted Dundee Precious Metals a go-ahead, signing a resolution that approves the environmental impact assessment ("EIA") for the company's Krumovgrad gold project.

According to the company the project plan takes into consideration concerns raised by the community through the use of water management and treatment systems and the elimination of cyanide as well as a tailings dam.

The new plan sees the construction of an open pit mining operation .

The plan consists of a process plant that will employ a conventional crushing, grinding, and flotation process for gold extraction and for the disposal of thickened tailings and mine rock waste.