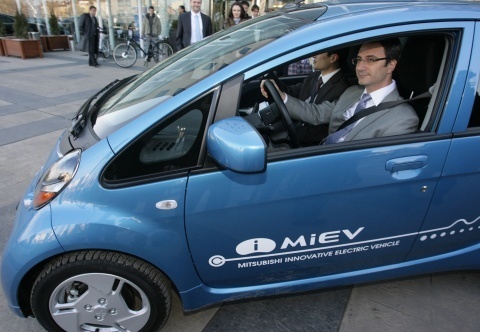 Pictured: Bulgarian Minister of Economy, Energy, and Tourism Traicho Traikov test-driving a Mitsubishi electric vehicle in the spring of 2011. Photo by BGNES

The installment of the very first electric car charging station in the Bulgarian capital Sofia begins Monday with an official groundbreaking ceremony.

The station will be located on 33 "Moskovska" street in downtown Sofia. There will be another 5 stations in the very heart of the capital – in the so-called blue parking zone – on the square in front of the Parliament, on "Macedonia" boulevard, two stations will be located on the "Alexander Stamboliyski" boulevard and another one – in the vicinity of the building of the Central Bank, BNB.

Initially, customers will pay by previously purchased vouchers and later - with credit and debit cards.

In the beginning of October, Bulgarian Economy and Energy Minister, Traicho Traikov, announced that the capital Sofia will have several electric car charging stations in just weeks.

Traikov further said that he was all in favor of introducing legal incentives for the use of electric vehicles, adding this is an issue that should not be overlooked.

The Minister voiced disappointment that the State has not done much in this direction and has nothing much to brag about.

According to him, such measures and incentives relate mainly to funds that need to be slated from the budget. He listed as possible incentives exemptions from the Value Added Tax (VAT) for the purchase of electric cars, elimination of registration fees, and parking privileges.

At the time, the Minister pointed out Sofia should follow the example of the French capital Paris, which launched a large-scale project to rent temporarily electric cars and ordinary bikes to be used in urban traffic.