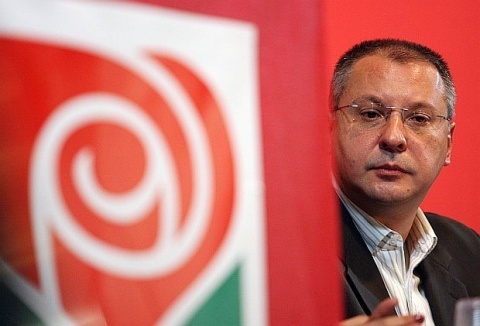 The Party of European Socialists must work to restore social justice and citizens' rights and place them at the heart of Europe, said new PES President Sergey Stanishev.

Friday the leader of the Bulgarian Socialist Party was voted to chair the European-level party for a year, after Poul Nyrup Rasmussen chose to resign early before the November 2012 congress.

"Together we will bring European citizens back at the helm of Europe. We can do it, we can change Europe for better," were the first words of his condluding speech at the PES convention Sunday.

"What's most important for us is that we have the voice of the people, that means the voice of reason, at our side," added the Bulgarian socialist.

In his speech, Stanishev argued that the currrent financial and economic crisis gives the lie to the rightist liberal methods of governance implemented in many EU countries.

"The development of the crisis shows that austerity is not the way to overcome it. Unemployment is growing, the crisis has deepened, the productive economy is in recession," remarked he.

According to Stanishev, European Socialists have as their task to show European citizens that leftists have a real alternative and to carry it out.

The Bulgarian and European socialist leader also brought to attention what he saw as the peril for democracy in some EU member states, including not only Hungary and Romania, but also his own homeland.

"I never imagined that elections can be carried out in Bulgaria as undemocratically as the October presidential and municipal polls," clarified Stanishev.

He stressed that socialist need to consistently work to reinforce democratic values and return power back in the hands of people.

Later Sunday Stanishev is expected to give a press conference upon his return in Sofia.