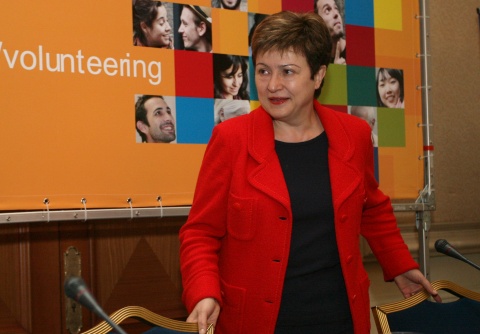 Bulgaria's EU Commissioner and former World Bank VP Kristalina Georgieva has defended the move of the ruling center-right party GERB that stipulates an increase of the retirement age by one year as of 2012.

"It is clear that Bulgaria needs a pension system reform. This is necessitated by the demographic profile of our nation. We are an aging nation. It is also necessitated by the need to remain competitive," Georgieva said in Sofia Saturday as cited by bTV.

On Friday, the ruling party GERB tabled to Parliament legislation amendments for upping the retirement age by 1 year as of January 2012, a brainchild of Finance Minister Simeon Djankov, which has been widely protested by the public and the syndicates because it came as a unilateral move after in 2010, the business associations, the unions and the government agreed that the retirement age will be raised only in 2021.

The Bulgarian syndicates are planning a massive protest rally against the move scheduled for November 30, after earlier they left in protest the council for tripartite cooperation where they were supposed to have talks with the government and the business sector.

In her comment Saturday, Georgieva emphasized the need for greater public dialogue in Bulgaria on the retirement reform topic.

She said she hoped the Borisov Cabinet – that she is affiliated with – would not turn the page after the present decision, and would continue the discussions with the other actors.

"[Bulgaria's] 2012 state budget has reformist directions in healthcare, education, retirement system. I am in favor of doing more of that today so that we can live better tomorrow," Georgieva noted regarding the budget for next year, which has already been adopted by Parliament at first reading.

She also said it was not unusual to see people going on a strike when such important issues as pension reform are at stake.

In her words, the rest of the EU views the ongoing general strike in the Bulgarian State Railways BDZ and the debate on the other reforms as a sign of democracy.