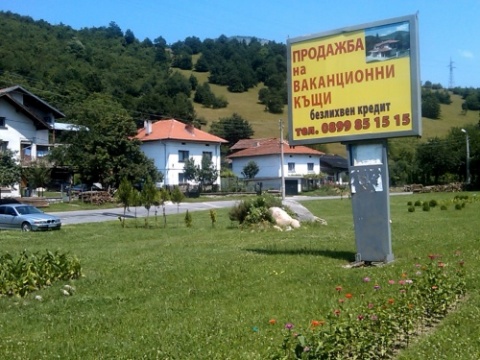 According to a recent study of the British, Rightmoveoverseas.co.uk, the interest of UK citizens to property in Bulgaria has dropped by 64% for the period July 2008 - July 2010. Photo by BGNES

British citizens are selling their Bulgarian coastal properties and are leaving the country.

The news was reported Saturday by the Bulgarian TV channel  bTV, saying that every other British-owned house in the village of Avren, near the northern Black Sea shore of Bulgaria, until now considered a paradise for foreigners, is listed for sale.

The Brits first came in large numbers to the village, which is located about 40 km from the Black Sea capital Varna, in 2003. They purchased houses then as investment, in order to resell them at higher prices after the country's EU accession. However, some 70 Brits later became permanent residents of Avren. The last wave happened four years ago.

bTV cite a British woman, who arrived with this last wave, saying she came for the money because she did not want to be doomed to poverty in England over her miserable State pension.

"With this money here, I can really enjoy life – I furnished a beautiful home with a splendid view; I can go the restaurant whenever I want," the woman explains, but adds she is disappointed and dissatisfied by the bad condition of the streets in the village. She further points out that her fellow country people, especially younger ones without a stable income, have left over the crisis after they realized expectations for profits from the property would not materialize.

Local real estate brokers report that most of the houses are mortgaged and owners now cannot make regular payments on the loans.

Others are leaving over the constantly increasing crime rate with many houses being robbed and the police failing to protect their owners.

The Mayor of Avren vowed before bTV that the local authorities will focus on improving both infrastructure and safety.

People from Avren hope that British owners will be replaced by Russian ones.