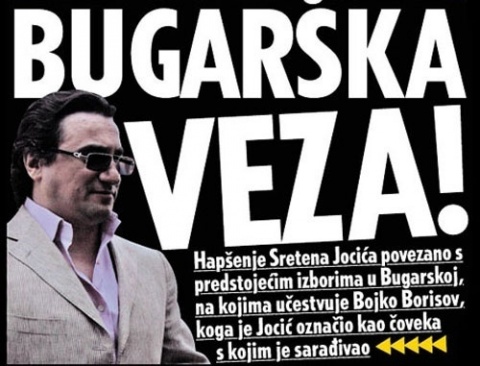 The defendant in Bulgaria's high-profile organized crime case code-named "The Killers," Vasil Kostov AKA Ketsa (The Sneaker) spoke before magistrates about a meeting between Prime Minister, Boyko Borisov, and notorious mafia figures.

The defendant said he was part of several such meetings in his capacity of security guard for Bay Mile, who was at the time one of the bosses at SIC corporation (allegedly one of Bulgaria's two powerful mafia structures, along with VIS, in the 1990s).

During one of these meetings, attended by Ketsa in person, Bay Mile, Josic, Stoil Slavov, and other individuals from SIC have discussed how to collect money to make Borisov a key figure at the Interior Ministry by buying him a post and a rank.

Before becoming Prime Minister after the summer 2009 general elections, Borisov was Mayor of Sofia and before that – Chief Secretary of the Interior Ministry (editor's note).

Vasil Kostov also told the magistrates that all permits for Bay Mile's security have been issued to the company IPON-1 Ltd, owned by Borisov at the time.

Stoil Slavov was killed by a bomb blast in 2004; the same year, Bay Mile was gunned down along with several security guards, while Sreten Josic was extradited to the Netherlands, after being arrested in Sofia in 2002. He spent two years in a Dutch jail before being returned to Serbia where he is charged with two murder plots.

In June 2005, Bulgarian media wrote that Josic had ordered Borisov's murder. The same information emerged in 2009, during the election campaign.

On Friday, the magistrates warned Ketsa that this testimony did not have anything to do with "The Killer's" trial, but the defendant managed to add that Borisov had been in charge of the illegal drug trafficking channel from Turkey to Bulgaria, and threw several more names of notorious Bulgarian crime bosses from the recent past, such as Konstantin Dimitrov, aka Kosyo Samokovetsa and Meto Ilieneski, who, he alleged, also had ties with Borisov.

It is also known that in the past Borisov had a joint business with another notorious SIC boss – Rumen Nikolov AKA Pashata.

In a diplomatic cable of the US embassy in Sofia, dated May 5, 2006, revealed on WikiLeaks and provided to the project for investigative journalism www.bivol.bg, former American Ambassador, John Beyrle, focusing on Borisov's biography and rise to power, wrote the following:

Accusations in years past have linked Borisov to oil-siphoning scandals, illegal deals involving LUKoil and major traffic in methamphetamines.

In the beginning of April 2009, Sreten Josic made headlines in Bulgaria, telling a Belgrade court he enjoyed the protection of high-ranking officials here, citing among others the name of the then Interior Chief Secretary and now Prime Minister, Boyko Borisov.

At that time, Borisov as Mayor of Sofia, vehemently denied the allegations, accusing the former ruling Three-Way Coalition of crafting a long-term strategy to discredit him.

When asked if he was aware of the rumors that Josic had ordered his assassination, Borisov said he had just done his job when Josic was arrested and extradited him to the Netherlands on the request of the Dutch police.

Ketsa is one of a number of people arrested in the summer of 2010 in what has been dubbed special operation "Killers" by Interior Minister Tsvetan Tsvetanov.

The operation was carried out by the police, DANS, and the Sofia City Prosecutor's Office in connection with the murder of the controversial Samokov football club president Yuriy Galev The President of the Bulgarian Sumo Federation Petar Stoyanov aka the "Chieftain" was among those detained.

After the arrest, President Parvanov's administration came out with an official statement refuting media allegations that Stoyanov is or has ever been an adviser to the President, but the chair of the Parliamentary Committee on Education, Science, Children, Youth and Sports, confirmed that Stoyanov was an adjunct advisor for them.

Tsvetanov announced a known criminal, Yanko Popov aka Tutsi, had ordered the murder of Yuriy Galev while the President of the Bulgarian Sumo Federation was one of the organizers Galev's murder. The other person ordering the murder was identified by the Minister as Vasil Kostov aka Vasko Ketsa (The Sneaker), who had also organized the murder of Shumen businessman Rumen Rashev.