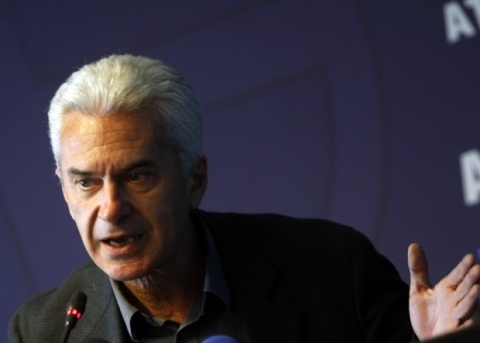 Nationalist leader Volen Siderov and 12 Ataka MPs have come up with a media statement deying widely publicized claims of a rift in the party. Photo by BGNES

13 of the total of 15 MPs of nationalist party Ataka MPs, Volen Siderov included, have pledged unwavering allegiance to the formation in a Friday media statement.

"Dear journalists, we would like to spare you the efforts you are wasting on searching proof of a rift in the parliamentary group. We declare that we have no intention to leave the group or the party," the letter reads.

Ataka's statement has not been backed by two of its MPs- Borislav Stoyanov and Kalina Krumova.

According to information from the nationalist party's press office, Stoyanov and Krumova do not agree with their colleagues' stance.

At the beginning of the week, the two denied allegations that they were leaving the ranks of the political formation.

Ataka was gripped by a scandal after its leader Volen Siderov was asked to step down by MEP Dimitar Stoyanov.

Stoyanov, who happens to be Siderov's stepson, explained his demand with the crushing defeat Ataka suffered at the end-October elections.

Stoyanov was subsequently removed from the party on the grounds of "tarnishing" and "undermining" Ataka's image with his media statements.

On November 06, Tsveta Georgieva left the parliamentary group of Ataka.

Georgieva explained her decision with the inconsistency demonstrated by Ataka, which had backed last year's budget, but had decided to oppose this year's.

Georgieva, the sixth MP to split from Ataka, left the party with a total of 15 MPs in Parliament.

Under parliamentary rules of procedure, if Ataka's MPs drop below 10, the group falls apart.

(Update, 17:00) On Friday afternoon, Kalina Krumova announced her decision to quit Ataka, thereby reducing its parliamentary headcount to a total of 14.

According to news portal dnevnik.bg,  Siderov may resort to pre-emptive action  and expel Stoyanov.