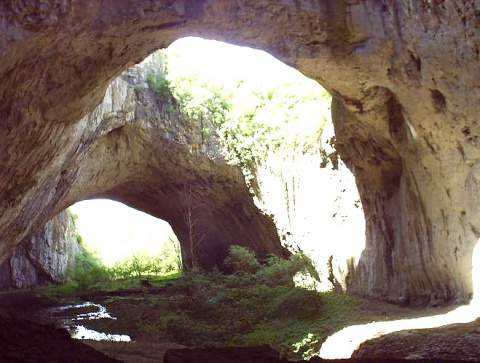 The reconstructed bridge to the Devetashka Cave will remain as a gift of "The Expendables 2" production to Bulgaria. Photo by bg-tourism.com

The bridge connecting the left bank of the river Osam and the Devetashka Cave, which was rebuilt from scratch for the the shoot of "The Expendables 2", will remain as a gift to Bulgaria, the production company said in a statement.

The bridge repair cost BGN 600 000, according to announcements made  after a meeting on the film set between Nu Boyana Film Studios CEO David Varod and Lovech District Governor Vanya Sabcheva.

The only thing that was left of the old bridge construction was the bridge columns, which were reinforced with concrete, while everything else was built anew.

The company contracted for the project was Plovdiv-based Metalik MM.

The reconstruction of the bridge is unique and is the first of its kind for Bulgaria.

The local authorities are positive that the new bridge, combined with the huge interest in the blockbuster action film will revive tourism in the region.

On November 24, Lovech's District Governor Sabcheva visited the Devetashka cave to see the unfolding preparations for the film shoot and make sure that the instructions of Bulgaria's Culture Ministry were being followed.