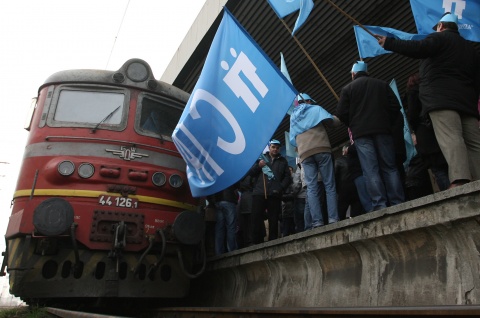 Bulgarian railway workers are set to strike every day from 8 am till 4 pm until they resolve their differences with the government and at least reach a compromise. Photo by Sofia Photo Agency

Hundreds of trains in Bulgaria will grind to a halt for the second day on Friday in protest against austerity cuts, but will hardly trigger chaos as commuters opt for the omnipresent bus.

Bulgarian railway workers are set to strike every day from 8 am till 4 pm until they resolve their differences with the government and at least reach a compromise.

The government says it has two options: it can either lay off 2,000 employees, or let the company go bankrupt.

Nobody seems to know how many trains really were affected by the railway workers' strike in Bulgaria on the first day of the strike on Thursday, with the Transport Ministry, the Bulgarian State Railways BDZ, and the syndicates all reporting different figures.

The Transport Ministry, however, announced vastly different data – 85 out of 210 trains were stranded by the strikers.

"The first day of the strike went even better than expected, especially against the backdrop of the severe pressure on the BDZ workers. We expect a greater number of workers to join the strike tomorrow," Bunev explained.