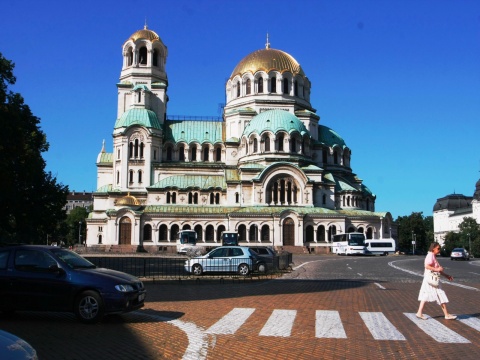 The St. Alexander Nevsky Cathedral, one of the largest Eastern Orthodox cathedrals in the world, is located in the very heart of Bulgaria's capital Sofia. Photo by pravoslvieto.com

The temple is the largest Eastern Orthodox cathedral on the Balkan peninsula. It holds, according to estimates, anywhere between 5 000 and 10 000 people and was built on the idea of Petko Karavelov.

The construction of the St. Alexander Nevsky Cathedral started in February 1882, when the foundation stone was laid, but most of it was built between 1904 and 1912. Saint Alexander Nevsky was a Russian prince – knyaz, a national hero and Saint. The cathedral was created in honor to the Russian soldiers who died during the Russo-Turkish War of 1877-1878, as a result of which Bulgaria was liberated from Ottoman rule.

In July 1240, the Knyaz, heading a small group of soldiers, defeated on the banks of Neva River the Swedish army advancing towards Moscow. The legend says that after the epic battle he was given the name Nevsky.

Built in Neo-Byzantine style, since 1951 the cathedral serves as the cathedral church of the Patriarch of Bulgaria. It is also one of the largest Eastern Orthodox cathedrals in the world, as well as one of Bulgaria's and Sofia's symbols and primary tourist attractions.

The mural, the mosaics, and the icons are the work of some of the most famous Bulgarian and Russian artists at the time. The cathedral has 12 bells, including the tallest bell on the Balkans – 53 meters.

Inside the cathedral, to the left of the altar, is a case displaying relics of Alexander Nevsky, given by the Russian Orthodox Church in March 2010.

Just days ago, the Bulgarian National TV, BNT, reported that the temple has no owner to take care of it.

The top Bulgarian landmark is without a title deed, and at the same time is in a desperate need of repairs, the BNT investigation has indicated. According to the report, the St. Alexander Nevsky Cathedral is not owned by the Bulgarian state, nor is it owned by the Sofia Municipality, or the Holy Synod of the Bulgarian Orthodox Church.