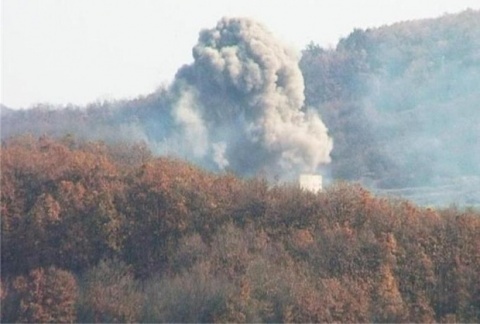 A thick cloud of smoke is seen rising above the former military warehouses in central Bulgaria, where explosions are reported for the fourth consecutive day. Photo by 24 Hours daily

The inspection started at 1 pm and includes 20 people - investigators, employees of the Operational and Technical Security Directorate (DOTO), of the National Fire Rescue and Civil Protection Services, servicemen, and sappers.

The Chief of the Regional Police Directorate in the central city of Gabrovo, Denislav Donkov, says all air quality measurements are within the norm, but it is too early to say how long the inspection will last.

On November 12, around 9 am, explosions occurred at the facilities between Sevlievo and the village of Lovnidol. The area was sealed and secured.

The six warehouses belong to the private, Sofia-based Emko company. They were purchased in 2008 and later renovated. Only one contained munitions. The warehouses were first sold by the Defense Ministry 10 years ago.

The inspection was postponed several times over reported new blasts, but there have not been any in the last 24 hours, which allowed the experts to enter the premises.

The facilities are aligned with all norms for safe storage of explosives and munitions, police explain, pointing out there were no radioactive substances inside.

Emko deals with repair of munitions, which were stored at the warehouse for utilization.

Immediately after the blast, measurements of air quality showed that all indexes were within the norm and there was no threat of elevated levels of harmful substances. No one was injured in the blast.